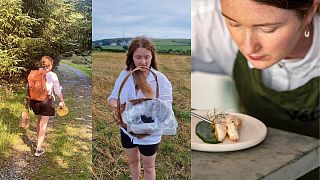 Pippa Lovell forages for the ingredients in her restaurant, Versa, on the Isle of Man   -   Copyright  Pippa Lovell
By Tim Gallagher  •  Updated: 10/01/2023

In recent years, in an effort to get out of the house and back to nature many people have taken up foraging - the practice of looking for edible items in the wild.

It can make a fun day out and even be a good way of decorating your home. However, over foraging can also be a concern with recent pleas from wildlife organisations in the UK for the public not to pick nature clean.

But what if foraging could actually benefit biodiversity? Euronews Culture has met one chef who thinks so.

Pippa Lovell is a restaurateur who moved to the Isle of Man from Copenhagen in 2018.

Despite early experiences blackberrying with her family, Lovell says she was turned onto foraging whilst working in the Michelin star restaurants of Scandinavia, although the award-winning chef was less than impressed by what she saw there.

“It was just so normal to use foraging ingredients but they do it for the sake of it being free and being cool and it being a thing that you do,” she says from her home in Port Erin.

“In general a Michelin restaurant might invite a lot of interns to do their foraging; that might be 10 to 15 people all going out for a full day or two or three days all going for one kind of mushroom or one flower or one seaweed.

“That many people all day doing it for a few days just to be one element of a 15 course tasting menu, to interrupt that little ecosystem and nature just for the sake of one flavour for one selfish use; I find infuriating.”

After relocating to the island off the northwest coast of England to set up a new restaurant, a life-changing event made Lovell rethink her approach in the kitchen.

In 2019 the chef won the S.Pellegrino Award for Social Responsibility after designing an eco-friendly dish. Shortly afterwards she opened up her restaurant Versa; as in ‘vice versa’ symbolising her reciprocal relationship with the land. Here she forages for 50 per cent of the ingredients she serves up to patrons, helping the local environment as she does so.

“If we’re going to do something as a species that’s detrimental to the environment and the community in many ways. Actually, let's flip it on its head and utilise the restaurant industry to do good.

The Isle of Man is part of UNESCO’s network of biosphere reserves; areas which foster the harmonious integration of humans and nature for sustainable development.

The list contains sites within countries like Lake Bosomtwe in Ghana and cross border areas like the Mura-Drava-Danube which spans Austria, Croatia, Hungary, Serbia, and Slovenia. However, the Isle of Man is the only ‘entire nation’ biosphere.

“I really wanted to move here because it’s a biosphere,” says Lovell.

“As a forager and a chef who considers herself an activist…it just seemed apparent that it was a really good place to use to talk about my values and ethos. It really supports everything I believe in here.”

Lovell’s method is to use invasive species in her dishes to help the Isle of Man’s biodiversity. Whereas some restaurants forage for rare ingredients to impress their patrons, Versa uses ones which are plentiful so that searching for them won’t disrupt local ecosystems.

A good example would be Lovell’s use of Alexanders, originally brought to the British Isles by the Romans. Known as ‘the pot herb of Alexandria’ this plant soon escaped the kitchen and went feral. It now blocks up hedgerows on the Isle of Man where Lovell uses its leaves as a replacement for parsley, the stem as a replacement for celery, and the seeds as black pepper.

“Using the seeds stops it from spreading,” she says.

“Ideally I’m looking for an ingredient that helps the environment by picking it.”

The bounty of nature

Despite her experience Lovell has no formal training as a chef. All her skill at cooking she’s picked up organically during her career along with her knowledge of foraging which she says comes from a mixture of books, social media inspiration and perseverance.

The chef resolutely refuses to use recipes at Versa, instead putting together tasting menus with her six-strong staff of local youths using roughly half foraged ingredients and half locally grown.

Foraging missions have a spontaneous feel to them, taking place on her morning dog walks or between midday and evening sittings. While the seasons dictate the menu a big part of Versa’s operation is also fermenting and preserving fresh ingredients.

“In the summer it could be a 20 courser that’s 80 per cent foraged. At this time of year I’m probably going to do eight or nine courses…and half is foraged and that is halved between fresh and preserved,” she says.

Lovell is so committed to her local produce ethos that she doesn’t even serve alcohol as it contains items which are imported, and she never runs short of inspiration in the woods, beaches and glens within walking distance of her restaurant.

“It's a lifestyle working at Versa,” she says.

“That’s the good thing about the biosphere. There’s an abundance everywhere.”

Fungi foraging: 5 safe and edible wild mushrooms to look out for

Wild mushrooms: A beginner's guide to safe and fun foraging in Europe