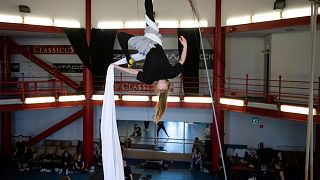 Swinging on the trapeze, juggling rings and twirling at great heights on aerial silks, young Ukrainians with a passion for performance are now training at a circus in Hungary after the war forced them to leave their studios and lives behind.

Around 100 Ukrainian students of circus arts, along with several adult chaperones, fled the embattled cities of Kharkiv and Kyiv as Russian bombings made conditions there too dangerous to remain.

But in neighbouring Hungary, fellow circus artists have extended their help by offering to take in the young performers and allow them to continue their training in the safety of the capital Budapest.

A new life in Hungary

"I can't stand it when I can't train. I just want to perform in circus shows," said Ira Maiboroda, a 16-year-old acrobat who fled Kharkiv and arrived in Hungary more than two weeks ago.

When she was in Kharkiv, she always dreamed of performing in circuses in other European countries.

After Russia invaded Ukraine, the Capital Circus of Budapest along with a Hungarian school for acrobats arranged for the Ukrainian circus students to come to the capital where they would be provided with food and accommodation.

Ann Lisitska, a 13-year-old performer from Kharkiv, said that while she was initially heartbroken when she had to leave her home and interrupt her studies, the welcome she'd received from the circus community in Hungary had helped ease the trauma.

"I had no idea what it would be like here. When I left I was very upset because my home studio was left behind, some of my relatives were left behind," she said.

"I didn't expect to be so well received and for it to be so nice."

The importance of continuing circus training

Gabor Kovacs, the director of the Baross Imre School for Acrobats in Budapest, said that in addition to having their basic needs met, it is important for the students to resume their training – even though they have been displaced as refugees.

He believes the continuation of their studies can contribute to making their daily lives a little more carefree.

In a training facility near the Budapest circus hall, the dancers, acrobats, jugglers and contortionists - who range in age from five to nearly 20 - were stretching and warming up before resuming training.

The young artists swing on silks and ropes high above the floor of the arena.

According to Kovacs, losing out on even a few days of training for a circus artist can mean a rapid decline in their skills.

"A week or two off work for acrobats is about the same as six months off work for professional athletes," he said.

"We have to try to create the possibility of daily practice so that these artistic children are able to work and develop continuously."

Solidarity as an art form

"The circus has always been an art form of solidarity. And we always must highlight this. There is no war within the circus," explains Kovacs.

This week, the Capital Circus of Budapest will debut a two-night show where organizers expect a full house, in addition to the Ukrainian students who will be in the stands.

All proceeds from the shows will be used to buy circus equipment for the Ukrainian performers, Kovacs said - a token of the strong bonds within the circus community.

Have we been getting Machu Picchu's name wrong all this time?

Who is the most boring type of person in the world?

President Zelenskyy: The actor now playing the role of a lifetime