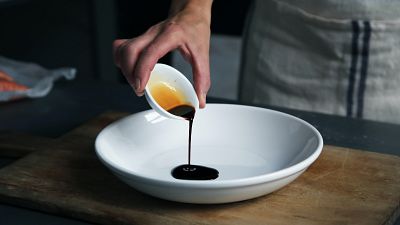 2022 has seen a slew of high-profile legal battles, from Johnny Depp vs Amber Heard and Black Chyna vs the Kardashian family in the US, to the infamous ‘Wagatha Christie’ trial of Rebekah Vardy vs Colleen Rooney in the UK.

However, this newest one will get you peckish.

The stage is set for a courtroom showdown between neighbouring Italy and Slovenia over the production of balsamic vinegar.

The face-off is taking place after Slovenia announced a policy to name any wine vinegar manufactured from fruit concentrate as balsamic vinegar.

Unfortunately for them (or not as the case may be), the name 'aceto balsamico di Modena' is uniquely assigned to products made in the Modena and the Emilia-Romagna regions of Italy.

Now, scandalised Italians are seeking to block Slovenia’s categorisation, which they claim threatens tradition, along with a lucrative €1 billion market which increased 60 percent in 2021.

For some extra background, the protected denomination of origin (PDO) for balsamic vinegar has been in place since 2009, and applies to balsamic vinegar aged in the Modena fashion for 12 years. Extra-aged balsamic products can be aged for 25-years, with some sought-after condiments being aged for up to 200 years.

Food in the courtroom?

Quarrels over the authenticity and provenance of foodstuff often make the headlines when so-called ‘agropiracy’ occurs.

Earlier this year it was ruled that the Danish could no longer call white cheese made in Denmark ‘feta’. The move was a win for the Greeks, who claim to have a 6,000 year monopoly on the product.

Protection of food by countries and regions is legitimised by eAmbrosia, the EU register which lists French champagne, Polish vodka, and Sneem black pudding from Ireland among over 1000 other food and drink items.

Food found on the list is entitled to legal protection to enable preservation of cultural heritage.

While cultural heritage rows can often erupt outside of the courtroom in the style Valencian chefs being angered by British chef Jamie Oliver’s paella recipe, other cases are more serious.

Recently, UNESCO put Ukrainian Borsch on its endangered heritage list - despite protests from the Russian cultural minister - due to the Russian invasion of Ukraine.

Is Italy likely to win in court?

The legal case will be heard at the court of justice of the European Union (CJEU), pending a consultation with the European Commission.

Actions against Slovenia began under recently-resigned Prime Minister Mario Draghi, whose government made a priority of protecting Italy’s food and drink heritage. Given projections are leaning towards a far-right government taking over in September, a focus on purity of culture seems unlikely to change.

However, the Italians may not find themselves as lucky as their Greek counterparts.

A similar case brought by the country against German company Balema in 2019 unsuccessfully prevented them from using the 'aceto balsamico' designation on food labels.