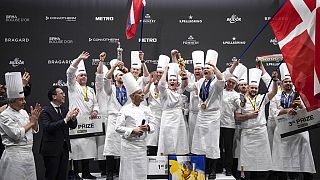 Denmark is celebrating a hat-trick of wins at this year’s Bocuse d’Or - better known as the "Gastronomy equivalent of the Olympic games".

More than just a one-off event in Lyon, the Sirha Bocuse d’Or involves 70 national and four continental events over a two-year period, culminating in a final showdown in France’s food capital.

Danish supporters were by far the loudest supporters in the competition’s great hall within Sirha, the world catering trade fair meeting at Lyon Eurexpo.

Brian Mark Hansen, a 41-year-old chef who officiated in a Michelin-starred restaurant north of Copenhagen, led the Nordic team to its third victory after the 2019 and 2011 editions.

Hansen thanked his entire team and said he had dreamt of this moment for 20 years.

"We give our best when there is a lot of noise around", he said, adding he trained while playing the soundtrack of previous editions.

Denmark won the jury's votes in both categories: a "children's menu" concocted around squash and a main dish made from monkfish tail, the most impressive piece of the competition.

Defending its title, France was represented by 25-year-old Naïs Pirollet, the only female chef candidate. She finished fifth.

“There is no sadness, it is a victory to have come this far,” she said.

"For young people, my participation had an impact, I hope it sends the message that you have to dare and that when you dare you move forward anyway."

Would you eat at this foraging restaurant on the Isle of Man?