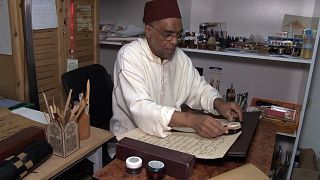 Calligraphy art or in Arabic "art of Hat" is one of Morocco's richest cultural artefacts.

Over time, keen calligraphers have worked tirelessly to save the tradition from extinction, and that effort has doubled since December last year when UNESCO added Arabic calligraphy to its Intangible Cultural Heritage list.

Since the Islamic conquest, Moroccan calligraphers relentlessly pursued their craft, despite scarcity of schools to teach the skill and a lack of raw materials.

Moroccan calligrapher Mohamed Serghini works in his office daily, using various materials to create inscriptions. His work may consist of a Quranic verse, or famous sayings or lessons.

The type of calligraphy Serghini creates appeared in the country in the first Hijri century, when it was used by the Berbers both in memorising the Holy Qur'an and as a means of communication. Serghini says there are now several types of Moroccan calligraphy.

Moroccan calligraphy is derived from the ancient Arabic Kufic script. It then evolved into what's known as the Kairouan Kufic script, which appeared during the Islamic conquests in the seventh century AD.

The Andalusian Mabsut script in eighth century AD followed, then after that, the Moroccan Mabsut script appeared, according to researchers in this field. Thanks to efforts and innovation, Moroccan calligraphy is still developing. Rather than have calligraphy schools, most learn through practices passed down by generations.

Each calligraphy has its own pen tip. This information was missing and was not provided. Then there was a scarcity at the level of paper. Now, we have a very large amount and variety of paper.

Serghini started learning calligraphy during his childhood. But he did not attend school, and lacked the materials needed, such as pens and papers.

"Each calligraphy has its own pen tip. This information was missing and was not provided. Then there was a scarcity at the level of paper. Now, we have a very large amount and variety of paper. The paper that calligraphers use is not ordinary paper, it is paper called pressed paper due to the stages it goes through, it is a special paper for writing, and it is suitable for writing and erasing, and it facilitates work. All of this was rare." Serghini says.

Moroccan and Arabic calligraphy is prolific

"The Maghrebized Mashreqi script, or the Moroccan Thuluth script, used to write with a sharp tool, which is the compass. It used to draw in wood, zellij, marble, and it was also drawn in manuscripts, then it was filled in and a margin was placed for it, and now it is writing with a very ordinary Arabic calligraphy pen. So, this is a development." Serghini says.

In the city of Fez, northern Morocco, a small workshop has been formed to teach Moroccan and Arabic calligraphy to children and younger people. The creation of such schools is considered an important initiative to preserve this heritage.

There have been attempts to revive this art in Morocco through the establishment of two educational institutions in Casablanca and in Fez.

Fatima Azzahra Sennaa is a student of Moroccan calligraphy at the Sarhrij School of Calligraphy in Fez. She's loved calligraphy since her childhood and got inspiration from her father, who's also a calligrapher and teaches at the same school. Azzahra's father encourages her passion and gives her advice.

"Since my childhood, I always saw my father writing and making paintings. This is what made me attracted to this calligraphy. I liked learning calligraphy as well. That is why I always sat near him and learned gradually. I started with drawing and then after that calligraphy" says Fatima.

Azzahra uses both modern and traditional methods, metal and wood pens. She uses pressed paper, which is thick. Calligraphy is considered a particularly inclusive practice in Morocco, and in recent years, it has become increasingly popular among women.