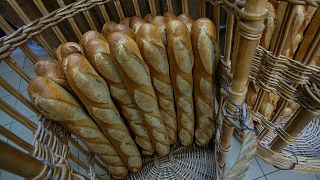 The baguette has been officially been inscribed on the Representative List of the Intangible Cultural Heritage of Humanity   -  Copyright  AP
By David Mouriquand  •  Updated: 18/12/2022

Imagine the cliché of a French person, and you’ll probably picture someone carrying a baguette.

And rightly so – it’s a national treasure and nothing beats it, or that warm nostril-tingling waft of freshly baked bread as you enter a boulangerie.

Make no mistake: it’s less a baked good and more a way of life, a symbol of the French art of living.

Well, now the baguette has (finally) been inducted into the UNESCO World Heritage List. To be precise, the "Artisanal know-how and culture of baguette bread" has officially inscribed on the Representative List of the Intangible Cultural Heritage of Humanity.

Every year, there are roughly 100 new additions to the list from around the world, a list which aims to protect and raise awareness of cultural heritage that cannot be defined by a single place or item.

The UNESCO statement reads that the baguette is “the most popular kind of bread enjoyed and consumed in France throughout the year.”

“Baguettes require specific knowledge and techniques: they are baked throughout the day in small batches and the outcomes vary according to the temperature and humidity. They also generate modes of consumption and social practices that differentiate them from other types of bread, such as daily visits to bakeries to purchase the loaves and specific display racks to match their long shape.”

The origins of the love affair between the French and their baguette (pipe down at the back) are not clear.

There are many different theories regarding their creation, the most popular being that Napoleon III supposedly asked bakers to come up with a different shaped bread (compared to the loaf) so that soldiers could easily transport them in their trousers or boots.

The real boom began in the 1920s with the modernisation of production methods. Quicker to knead, rise and bake, the baguette dethroned the large country loaf.

Since 1993, baguettes are protected under a national law called the Décret Pain, which stipulates that traditional baguettes have to be made on the premises where they are sold and can only be made with four ingredients: wheat flour, water, salt and yeast. They also cannot be frozen at any stage or contain additives or preservatives.

The country had previously chosen to submit the baguette as a candidate for a place on UNESCO’s 2022 List of the Intangible Cultural Heritage of Humanity – preferred over Paris’ zinc-plated rooftops and the annual Arbois wine festival in the Jura region.

The choice was made by France’s then-Minister of Culture Roselyne Bachelot.

“If this bid is successful with UNESCO, it will help to make people aware that a food practice that is a part of everyday life, shared by a majority of people and taken for granted, constitutes a part of our heritage in its own right,” read a statement by the Ministry of Culture in March 2021.

Other French heritages already on the list are the “gastronomic meal of the French”, added in 2010, and the “skills related to perfume in Pays de Grasse”, added in 2018.

What should you ask a baker before buying a baguette in France?

Here’s where you can find the best baguette in Paris