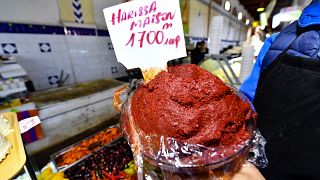 A shopkeeper shows a plate of Tunisian Harissa at the central market of the capital Tunis on December 1, 2022.   -   Copyright  FETHI BELAID/AFP or licensors
By Jonny Walfisz  with AFP  •  Updated: 23/12/2022

Earlier this week, the baguette was given official status as part of France’s intangible heritage by UNESCO.

As much as the baguette may be the best thing since sliced bread, it wasn’t the only new addition to UNESCO’s ever-growing list of great intangibles from tangible places.

Now, products from two countries in Northern Africa have been given status as part of the intangible heritage of humanity: Raï folk song for Algeria and the delicious spicy paste Harissa for Tunisia.

If you’ve not heard of Raï, now’s the time to add it to your playlists. Originating in the 1930s in Algeria, Raï music was practised by senior rural figures alongside traditional orchestras.

Raï exploded in popularity in the 80s and 90s when the ‘Chebs’ (young people) modernised traditional Algerian music.

In 1985, the first Raï music festival was held in Oran, where the folk music originated. The next year, there was the first international festival near Paris.

Cheb Khaled is probably the most famous Raï artist, a worldwide star by the 90s. He was the first North African to chart in the French top 50 with his song ‘Didi’.

Raï hasn’t been without its dark times. Between 1992 and 2002, many Raï singers were murdered. This included one of the most famous, Cheb Hasni, who was murdered in Oran in 1994 by Islamic fundamentalist extremists.

After the killings, Raï slowed in popularity, but it has seen a resurgence in recent years thanks to Franco-Algerian global star, DJ Snake’s hit 'Disco Maghreb'.

It happened to us all. You heard that the baguette was part of France’s intangible heritage and had the same thought.

“Yes, I love baguettes. But they’re a bit dry without anything to spread on them.”

Well worry no more. Tunisia is here with the spice paste of your dreams.

The knowledge, skills and culinary practices around Harissa paste in Tunisia have been rewarded and recognised by the UNESCO committee.

Cooked from sun-dried peppers, spices and olive oil preserve its flavour while giving it a mild heat. It’s a staple of Tunisian cooking as a condiment, an ingredient and a dish in its own right.

After being dried in the sun, chilli peppers are then washed, ground and seasoned with salt, garlic and coriander using a pestle and mortar or a manual meat mincer.

The ways the chillies are cultivated and stored is all part of the intangible heritage unique to Tunisia. The country’s agrarian calendar prohibits sowing the seeds at certain periods of the year due to superstitions.

Chillies are hung on looms and replicas are made from coral to avoid bad luck.