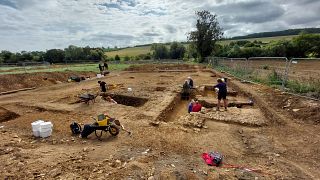 Archaeologists in the UK have unearthed finds which show the luxurious lifestyle of the ancient Roman elite.

The villa complex was discovered in 2020 in the central county of Rutland by a family on a lockdown walk.

Investigations had already revealed a beautiful mosaic depicting tales from the Trojan War. Now, further excavation by Historic England and University of Leicester Archaeological Services (ALAS) has revealed the expensive and extravagant taste of a rural family.

“This is a fascinating site and has posed many questions about life in Roman Britain,” says Historic England’s Chief Executive, Duncan Wilson.

“The answers will become clearer as the evidence is examined over the next few years by a team of specialists, and their work will help us understand the story of this villa complex.”

One building, the size of a small church, was revealed to be a barn with timber supports, which was converted to stone around the 3rd or 4th century - with one half used as a human dwelling.

Several of the barn conversions' floors were still intact and it would have featured underfloor heating, a bath and steam room complex, showing a cultural association with the Roman Empire.

“This year’s excavations…have further revealed what a remarkable place this was during Roman times. A place built for comfort, and clearly to impress – but who?” ponders Ian Barnes, Historic England Senior Archaeologist.

The initial discovery of the 11m by 7m Trojan War mosaic was made by a local man named Jim Irvine.

The artwork is one of the few known works to depict Achilles’s final battle with Hector at the end of the war.

At the time Irvine reported the find to local authorities who now protect the rare, priceless archaeological gem.

The mosaic is laid out on the floor of what is believed to have been the dining room where pieces of polished marble and the remains of stone pillars were also found.

The researchers believe that the elaborate decoration, along with evidence of a network of smaller buildings, indicates a thriving villa set up in the heart of the UK.

“While previous excavations of individual buildings, or smaller scale villas, have given us a snapshot, this discovery in Rutland is much more complete and provides a clearer picture of the whole complex,” says John Thomas, Deputy Director of ULAS.