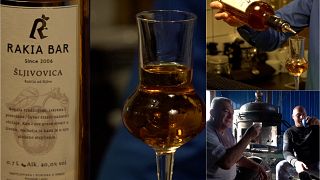 The plum brandy sljivovica has been handcrafted - and consumed - in Serbia for centuries, a custom carried from generation to generation.   -  Copyright  AP Photo
By Kerem Congar  & AP  •  Updated: 26/11/2022

The plum brandy sljivovica has been handcrafted and consumed in Serbia for centuries, a custom carried from generation to generation. The drink has become part of the national identity.

Later this month, U.N. cultural agency UNESCO is expected to decide whether to include "social practices and knowledge related to the preparation and use" of the spirit to its list of the world's intangible cultural heritage.

Sociologist and editor of the "Rakia, Mostly" blog, Ilija Malovic, says that sljivovica is a typically Serbian product, based on widespread locally-bred fruit - plum - and made and consumed within families and local communities.

"Once upon a time, before a house was built, the plum tree was planted first to see whether it would bear fruit and if it did it meant that the ground is clean, healthy, sometimes even sacred. And then people would start building their own house there."

For improved quality, sljivovica is sometimes kept in oak barrels that give it a yellowish, whiskey-like colour and a somewhat bitter taste.

The precious drink for celebrations

People have always stashed away their best bottle of sljivovica for weddings or christenings, but also funerals, adds Malovic.

"It (sljivovica) always has been tied intimately to family," he says.

"Sljivovica is part of people's lives from beginning to end, and has always been part of this nation's identity."Nowadays, sljivovica is also an important Serbian export and a local attraction for growing numbers of tourists visiting the Balkan country.

"We have realized that in our grandparent's basements, in villages, we have something that stimulates the senses, that is on the same level as cognac, single malt whisky or bourbon," says says Malovic.

Now the nation waits to see if UNESCO agrees that this drink is something special.

It's a drink so popular here that entire shops are dedicated to it. And despite a boom in modern distilleries and brands, there are some who like to make it themselves, especially in rural areas.

In the central Serbian village of Rozanci, Miroslav Milosevic makes his own sljivovica, using plums from the family orchard and a technique that his father and grandfather used before him.

A peek inside Milosevic's backyard shed reveals a distillery that includes metal barrels, wood-fuelled stoves and white cotton cloths through which the final product is filtered.

"You can buy rakia (brandy) everywhere, but you cannot always buy pure and nice (rakia) brandy. We brew rakia (brandy) purely from plums. Some people make all sorts of things. We make pure rakia (brandy) for our own use, and what is left can be given as a present to friends or sold," he says.

As he measures his sljivovica's alcohol content, he thinks of the stories passed down about it.

"Our elderly used to say it's like a medicine. You drink one small glass and it's a cure." he smiles. It's certainly something his friends enjoy drinking with him.