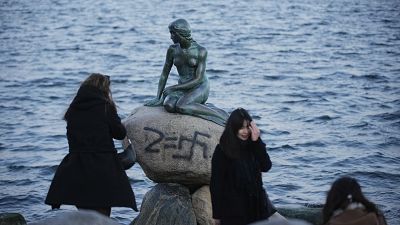 The little Mermaid statue in Copenhagen has been the site of many political messages over the years   -   Copyright  RITZAU SCANPIX/via REUTERS
By Tim Gallagher  •  Updated: 16/03/2022

Images show that the fairytale character has been spray-painted with signs equating a ‘Z’ with a swastika.

The letter Z sprayed on Russian tanks and worn on clothes is generally understood to display support for Russia's invasion of Ukraine. The symbol is now used by Russian state media and in advertisements.

Similar signs have also been daubed on the walls of a Russian Orthodox church in Copenhagen. The Aleksander Nevskij Church does not belong to the Russian Orthodox Patriarchy in Moscow and has in fact organised a collection of funds to help refugees in Ukraine.

No comment has yet been made by Copenhagen officials.

Is this the first time the statue has been vandalised?

The Little Mermaid statue has long been a must-visit site for visitors to Copenhagen, even before Instagram.

Commissioned in 1909 the statue was made by sculptor Edvard Eriksen and was presented to the city four years later. The character rested peacefully on her rock-like plinth through two World Wars until 1964.

In the traditional tale the Little Mermaid trades in her mermaid’s tail for a pair of legs but in that particular year someone (who has never been identified) beheaded her with a hacksaw.

She was restored only to lose an arm two decades later to a pair of drunks in a late-night escapade.

Further attempts were made to decapitate the mermaid, but not until 1998 was anyone successful and in true Scandi-noir fashion a murder squad were put on the case to find the culprits.

Unfortunately, this series had an unsatisfying finale and, despite a confession by a group of radical feminists claiming it was a protest again sexualisation of women, no one was ever brought to justice.

The Little Mermaid; an unlikely icon of political protest?

Despite the refusal of the Danish police to believe the radical feminists, the Little Mermaid statue has been a site of many political protests of varying stripes.

In 2017 the Little Mermaid was covered in blue and white paint in a protest against whaling, and in January 2020 ‘Free Hong Kong’ was scrawled across the statue.

It may be that this latest defacement is just one in a long line of political statements that the mermaid has attracted, and it’s difficult to think that Hans Christian Andersen saw this coming when he was penning children’s stories.

Largest ever retrospective of Ai Weiwei's work opens in Vienna