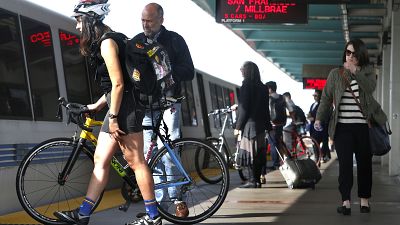 Portugal is the latest European country to update its rail system. The government has announced new high speed trains which could halve journey times.

The plans, which were unveiled on Thursday, include high speed trains in the ten largest Portuguese cities and rail links in every district.

The high speed trains will be accompanied by a third crossing over the Tagus river (in the Lisbon region) in a huge overhaul of the national railway system in the Iberian nation.

The announcement was made by Infrastructure Minister Pedro Nuno Santos, who said that the aim was to modernise the country’s national rail infrastructure and make it more eco-friendly.

Santos also said the plans could make journeys from Lisbon and Porto to Madrid possible in about three hours.

It would halve the travel time between Lisbon and Porto from the current 2 hours 50 minutes. A third crossing over the Tagus will shorten the trip to Lisbon from southern regions by at least 30 minutes, said Federico Francisco, coordinator of the working group drafting the plan.

Portugal is centralising train travel as a way to cut driver numbers and meet its objective to become carbon neutral by 2045.

What other European countries have high speed rail?

There is no set definition of high speed rail but it’s generally anything that travels at 250 km/h.

Japan and China are famous for their high speed rail links with the fastest route in the world running at 350 km/h between Beijing and Shanghai.

In Europe many countries have high speed rail infrastructure with France and Spain leading the pack followed by Germany, Italy and the UK. Other countries like Poland, the Netherlands, Belgium and Sweden also have intercity high-speed rail links.

Famous high speed routes in Europe include the London to ParisEurostar, but the fastest runs between Madrid and Barcelona, eventually connecting the Barcelona to Perpignan line to France.