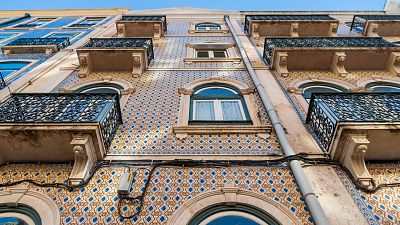 From its legendary porcelain tiles to its iconic yellow trams trundling the Lapa streets, Lisbon is of course renowned across Europe as a design city.

The colours of the ancient buildings – turquoise, baby blue, pink, tangerine, and everything in between set the place off and give it a unique look. The white and blue tiles on these buildings add verve. And the pavements, each decorated in a unique swirling style of black and white in patterns as diverse as curves and grids are a feast for the eyes.

Lisbon's design icons stand out – the St Justa Elevator in wrought iron that takes punters up the hill to Chiado, the long Avenida Liberdade boulevard that stretches northwest from the city centre, the overblown Venetian/Ottoman-inspired Rossio Train Station, the Ponte 25 de Abril – looking like San Francisco's Golden Gate Bridge, the neo-brutalism of the National Car Museum, even the 1980s postmodern explosion of the Amoreiras Shopping Centre are all stand outs.

Boutiques selling local furniture and interiors and clothes abound too. One of the most interesting is the +351 fashion boutique, named after Portugal's telephone code. You could even say the famed custard tart is a design icon - attractive, functional, distinctive, wildly popular.

You could even say the famed custard tart is a design icon - attractive, functional, distinctive, wildly popular.

At MAAT (Museum of Art, Architecture and Technology) charismatic director Beatrice Leanza explains to me how she has stripped back some recent accretions to reveal the full majesty and simplicity of British architect Amanda Levete's 2016 design for the museum's new building on the Belem waterfront. Coinciding with this is MAAT's new exhibition X Is Not A Small Country – a kind of mini Venice Biennale.

The new space is cut across by a model of the glowering US-Mexico border fence at Tijuana which Ronald Rael and Virginia San Fratello inserted seesaws into.

Also featured is 'cheap architecture' – a set of stairs and chairs you can hang out on from India's Bard Studio, Wolfgang Tillmans' posters about EU election voting and films about the Middle East in a special cinema.

Technology is at the heart of good design of course and at MAAT another new exhibition teaches visitors about their own contribution to the climate crisis. A cool mixing desk allows you to change your choices and inputs to show how much carbon you're contributing with the results displayed on a big screen.

Over at Jardim Luis Borges a supermarket of the future has opened. A handsome hipster from retailer Continente's tech arm Labs explains to me how this futuristic new store with no tills works.

Scales on the shelves weigh what's been taken and cameras and sensors track shoppers who pay with a bespoke app.

Where to eat: The coolest design-led restaurants in Lisbon

Food is everything here. Lisbon's restaurant renaissance continues apace with amazing eateries featuring flamboyant designs like the remarkable 100 Maneiras, which looks like an All Saints store with its dark gothic vibes, animal skulls and mirrors.

The Michelin starred Bosnian mixed with Portuguese food hits high notes: like the homemade breads with Bosnian sides, and the wraps you make yourself which come with a tube of sauce marked 'poison' you dispense yourself. The food comes on boards, in vases, in metal urns, on extravagant tree-shaped platters.

Every restaurant needs conventional plates though and Vista Alegre makes the best in town. Tapisco commissioned their own bespoke bowls and plates with red rims to match their own swish décor. A crab salad looks great tucked into one.

With an amazing view and complex cooking, Fifty Seconds is another head-turner in the city. Drogaria is an immensely friendly and convivial little resto in a quiet area with really great interiors that look like something you'd find in London’s Dalston and cuisine which mixes a little Asian with local favourites.

Cura has plenty of bling and also creative cooking that could win it a Michelin star in the next room of results. Restaurant Eleven features sumptuous décor in its dining room and panoramic views from its perch up in Park Eduardo VII.

Retro hipster designs set off Tantura – and the pan-Mediterranean and Middle Eastern food is a winner. While at Salt masculine and sober décor adds to the atmosphere of it being somewhere you spoil yourself.

The recently restored Ritz, a Four Seasons Hotel, showcases the best Portuguese design of the late 1950s in its public areas. Sumptuous furniture, paintings, sculptures and huge tapestries give a flavour of how luxurious this would all have seemed at its 1959 opening.

With mid century lighting and furniture, and even retro toiletries, added to the pinks and greens, it's like you stepped into a Made.com catalogue at The Vintage.

Lumiares sits in the middle of Bairro Alto and has quirky interiors with symmetrical stripes in its bedroom and a killer rooftop lounge and bar, Lumi – with amazing Pica Pau and tempura courgette.

Hotel White has a sundeck and pool and calming whites and greys in its rooms. Memmo Principe Real is a centrally located design hotel with an ambitious aesthetic and a cool vibe too.

Amazing views from terrace rooms and the roof bar (check out the free evening welcome drinks) mark out this Chiado place with lots of whites and greys and pictures related to writer Fernando Pessoa.

Portobay Liberdade has lavish autumnal interiors, great restaurants and bars and a luxurious spa to boot.

Sana Hotels prides themselves on different design-led aesthetics, as showcased at the Sana Epic, Myriad, Rex and Evolution.

The One Anunciada Palace is chock full of crisp design features and don't forget the heritage touches and pool. Sister property H10 Duque de Loule is set off with an impressive azure tiled terrace evoking the Portuguese Golden Age.

Mama Shelter also comes from Paris to Lisbon in November to deliver its lauded design-led mission. Its original Paris interiors were of course by Phillippe Starck.

A guide to Europe’s most impressive active volcanoes

How to experience Paris through the eyes of Ernest Hemingway