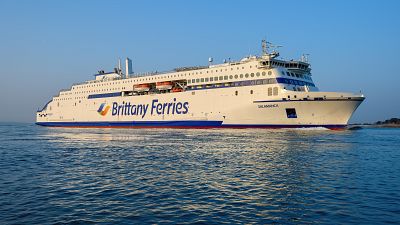 Travellers will soon be able to travel directly from Ireland to the Spanish city of Bilbao on this twice-weekly ferry.   -   Copyright  Gary Davies/2022 Maritime Photographic   -
By Rebecca Ann Hughes  •  Updated: 18/11/2022

A new “cruise-ferry” will begin sailing directly from Ireland to Spain twice a week.

Brittany Ferries announced the launch of the ship which will take travellers from the southeast tip of Rosslare to Bilbao.

The Salamanca will be able to carry over 1,000 passengers from the Europort.

The ferry will accept bikes, foot passengers and dogs on the crossing.

How long does it take to sail from Ireland to Spain?

The 214.5 metre-long ferry will take over the direct route from Rosslare to Bilbao twice a week. It will depart on Wednesday and Friday mornings.

The crossings will take between 29 and 30 hours and passengers will spend one to two nights on board.

Travellers will arrive in the northern Spanish city of Bilbao, famed for its iconic Guggenheim Museum and stellar Basque cuisine.

How much will the ferry cost from Ireland to Spain?

The price for a one-way ticket for two passengers and a car will reportedly cost from €232. This includes reclining seats.

With a cabin, the ticket price is quoted as starting from €342 each way.

Passengers are required to book a seat, starting at €12 each way, or a cabin. A bed in a four-berth cabin costs from €135 each way this month.

There are 343 cabins in total, 22 of which are “especially designed for passengers travelling with their pet dog,” according to Brittany Ferries. There is an extra cost for the pet-friendly accommodation.

What facilities will the new ferry have?

The Salamanca, named after the historic Spanish city of elegant sandstone architecture, has a main bar inspired by the city’s central square.

Elsewhere the ship features playrooms for children, shopping boutiques and an exclusive lounge.

How Saudi Arabia plans to become a top tourist destination