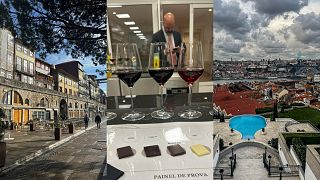 When you think of Porto, Portugal’s second city, the first things that come to mind are probably azulejos adorning every street, impressive bridges traversing Douro river, pasteis de nata and - of course - Port.

But for too long, one of Porto’s key cultural exports has been overlooked - despite regions like the Douro Valley often being cited among the global heavyweights. What we’re talking about, of course, is wine - or more specifically, wine that isn’t Port.

It’s no secret that Europe produces some of the finest wines in the world. From the rolling vineyards of Bordeaux to the picturesque plateaus of Piedmont, winemaking is a key part of European history. It has played a big role in putting certain destinations on the map. Porto - and its proximity to the Douro Valley - is firmly on that map.

So why do Portuguese exports still only make up about 3 per cent of the global market share?

I visited the city for 72 hours with the sole ambition of finding out as much as I could about Portuguese wine (don’t worry, I didn’t taste all 340 varieties produced across the country in that timeframe).

The mission directed me to the major development that is World of Wine, located in the city’s Vila Nova de Gaia district. Moving forwards, we’ll call it WOW because - well, it is.

Owned by the Fladgate Partnership - a descendant of the Taylor’s Port dynasty - this hub of quality restaurants, suave bars and interactive, engaging museums is changing the game when it comes to educating visitors about Portuguese wine.

Here’s what I learnt.

Portuguese wine is all about community values

Much like the rest of this diverse country, community is at the heart of Portugal’s wine production. The attitude is very much: we’re competitors on the supermarket shelves, but how can we share knowledge and learn together?

During a session at WOW’s in-house wine school all about ‘demystifying wine’, it was put quite simply by our teacher for the day and a master in the trade, Jose:

“What sets Portuguese wine apart is its culture. We compete globally in terms of our backstory, our know-how built over generations, the quality and character of our wine.”

It’s this idea of ‘know-how’ that piqued my interest.

What sets Portuguese wine apart is its culture. We compete globally in terms of our backstory, our know-how built over generations, the quality and character of our wine.

Thinking about the concept in terms of geography, Portugal is a relatively small country, yet its overall area of vineyards is the fourth biggest in Europe. There are 340 grape varieties grown across the nation. 240 of these are native (all things I learnt in our two-hour class). That’s a lot of overlap between the producers curating their crop - especially when a majority of them are neighbours operating in the Douro Valley.

What makes this particular region so perfect for grape growing is two elements. The valley’s climate and its soil.

Dry and warm by nature, the Douro Valley’s ‘continental’ temperatures can reach 40 to 50C during the day and drop to 10C at night. The vineyards are protected from unpredictable coastal weather and wind by the Serra do Marão, a conveniently positioned mountain which literally acts as a natural barrier between the valley and the sea.

Meanwhile, the soil is largely slate-based. While that makes it arguably devoid of nutrients, it heats up during the day, holds the warmth and releases it at night, keeping the vines snug. It also naturally absorbs a lot of water and - as all regional soils do - contributes to the overall flavour of the wine.

The art of growing grapes in these conditions has been perfected through conversation, tried and tested methods and sharing what works throughout years of winemaking in the region.

During my stay, I was a guest at The Yeatman - a luxury hotel that almost mimics a vineyard in its layered structure - and provides some of the best views in the city. It’s been designed so that every room faces out across the river, providing guests with THE view of Porto. Literally the postcard.

The Yeatman and WOW together are closely affiliated with many of Douro Valley’s top producers. And one-touch which, again, just really brought home the sense of community spirit - was that every room is named after their partners in wine.

Not only that but the winemakers, whose names adorn the doorways, put a few of their own personal possessions in each one. Be it a bottle or two from their vineyard, their favourite books or some artwork.

I left my trip feeling warmed by this knowledge.

The experiences at WOW go above and beyond just the liquid in the bottle.

One of WOW’s museums is entirely dedicated to cork. Portugal is actually the world’s biggest producer of cork, with the world’s largest concentration of quercus suber forests lying in the south.

Another highlight is definitely the drinking vessel collection belonging to Adrian Bridge, CEO of WOW. Dating back 9,000 years, from clay to ceramic and through to the modern-day glass, it’s home to nearly 2,000 pieces altogether.

Admittedly, there’s no chocolate river, but I wouldn’t put it past the visionaries behind the WOW project to explore that as a possibility.

But one thing I was especially interested in seeing was the part of the palatial site dedicated to chocolate. The Chocolate Story museum is the closest thing I’ve seen to a real-life Willy Wonka factory. Admittedly, there’s no chocolate river, but I wouldn’t put it past the visionaries behind the WOW project to explore that as a possibility.

Now, sit me down in a room with five glasses of wine and five different types of chocolate and tell me we’re doing a tasting for the next few hours, and you’ve got one delighted travel writer on your hands. Especially when our host, Pedro Martins Araújo, turns the conversation into a debate about consumer versus corporate responsibility when it comes to the line of production.

Pedro’s brand, Vinte Vinte, is the result of years of research, relationship-building and industry expertise. He told us stories about the people he had met in Venezuela, Madagascar, Peru and Uganda.

“The best chocolate,” he says, “should have no more than two ingredients.”

I’m not arguing with anyone who fundamentally believes wine and chocolate is the perfect combination.

What else is there to do in Porto?

Porto is a vibrant, coastal city home to nearly a quarter of a million people. Small but mighty, locals take great pride in the fact that the city hasn’t been conquered since the 1300s, despite France’s best efforts.

Wandering the colourful streets, filled with buildings that almost look askew, could take up a whole day alone.

Porto is also a fast-growing foodie hub - two unmissable dishes include pasteis de natas with your morning coffee and the iconic francesinha, a meat-stuffed, cheese-wrapped sandwich best enjoyed with a cold bottle of Superbock. For the more adventurous, dobrada is a traditional stew made with tripe (cow’s stomach) and white beans.

Must-see sights include the Ponte de Dom Luís I (not that you can miss it) - a colossal feat of construction spanning 172 metres wide and standing two tiers high.

A World Heritage Site and located in the city’s historical district, Igreja de São Francisco is a must-see for its intricate interiors. The unimposing facade hides a labyrinth of Baroque design that is often cited as the country’s finest.

The climbable Clérigos Tower is one of the best views in Porto. Taking you 75 metres above the city, it’s worth planning the 240-step ascent before you tuck into a hearty francesinha. Firstly - helps you feel like you’ve earned it. But more importantly, there’s no medical evidence to state just what the cheese, carb and meat feast does to your arteries, so best to avoid vigorous exercise directly after consumption.

In the historic Ribeira district, you can experience Porto’s heritage as an estuary town firsthand. The clue is quite literally in the name. As one of the oldest neighbourhoods in the city, it’s the best area to find quiet cobbled streets dotted with hidden restaurants and bars that serve local favourites like sardines and seabass.

The majestic Sé Cathedral is a Romanesque Catholic church and one of the city’s oldest buildings. It’s also known simply as Porto Cathedral.

I could go on for hours but my final recommendation for a visit is the Bolsa Palace. A dominating presence on the Porto skyline, it has a room made entirely of gold leaf. One of the city’s younger buildings, it came into being in the 19th century - ‘bolsa’ means stock exchange.

Today, it’s open to visitors and is often used to welcome dignitaries and heads of state to the city.

Though I spent just 72 hours in this Portuguese city, I learnt more than I ever thought I would about its culture and community. One of my biggest takeaways will be just how overlooked this country is as a producer of world-class wines.