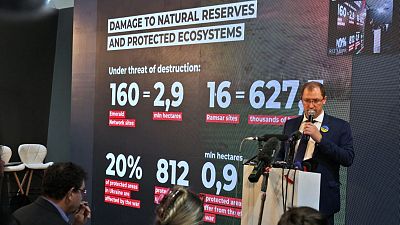 Russia’s war in Ukraine has led to the release of huge amounts of greenhouse gases and widespread environmental destruction, Ukraine’s environment minister said on Monday (14 November).

He called on the global community to hold the country responsible for its actions.

"Russia must be held responsible not only to Ukraine, but also to the whole world," Ukraine’s Environment Minister Ruslan Strilets said during a news conference on the sidelines of COP27.

Ukraine said it is collecting evidence of environmental crimes with which to sue Russia, and is launching a platform to evaluate the environmental damage caused by military action.

Since the start of the war in February, Ukraine claims to have gathered evidence of more than 2,200 cases of environmental damage, costing a total of €37.8 billion.

How has war in Ukraine affected greenhouse gas emissions?

Ukraine claims the war has directly led to emissions of 33 million tonnes of greenhouse gases.

Rebuilding the country will cause a further 49 millions tonnes of emissions, it adds.

“The aggressor country must bear responsibility for greenhouse gas emissions generated by its actions,” the country’s environment ministry said in a report outlining the scale of the damage.

More than 2,200 cases of damage to the environment have been recorded so far, Strilets told reporters.

"But the main challenge, and we understand it, is that it will be very difficult for us to file (law)suits for every environmental damage," he said.

"We call upon each and everyone to join the struggle of the life of human civilisation. Not only Ukraine, but the whole world should demand responsibility from Russia.”

How has the war affected Ukraine’s biodiversity and resources?

Approximately 600 animal species and 750 species of plants and fungi are under threat, including species on the International Union for Conservation of Nature's Red List, says Ukraine.

Since 24 February, the country says it has also documented 120 dolphin deaths in the Ukrainian part of the Black Sea.

The war has also damaged forests, water resources and infrastructure, and polluted fields and filled them with mines, says Ukraine.

Approximately 2.45 million hectares of Ukrainian forests have been damaged and need to be restored, the country adds, while 20 per cent of its protected areas have been affected by the war.

War has also led to an estimated €7.8 million in losses to water resources, says the country. It estimates that around €7.7 billion will be needed to restore irrigation, drainage and hydrotechnical structures.