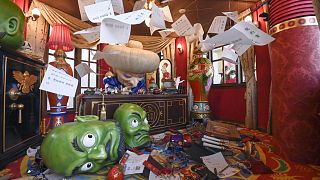 A recreation of Yubaba's office from Spirited Away in the Ghibli's Grand Warehouse area.   -   Copyright  Kyodo via Reuters Connect
By Rosie Frost  •  Updated: 02/11/2022

Ghibli Park, which opened its gates on 1 November, warns visitors that they won’t find any rides or attractions within its walls. Instead, it aims to bring to life much-loved scenes from films like Spirited Away and My Neighbour Totoro.

Guests are encouraged to “take a stroll, feel the wind and discover the wonders” in this mix between a park and a museum.

On Tuesday, guests waited to be let in for the first time as part of a partial opening, watched by director Goro Miyazaki, son of Japanese animator and co-founder of Studio Ghibli Hayao Miyazaki.

He told press that the park aims to “preserve Ghibli’s works for future generations so that they would not be forgotten.”

What can you see at the new Ghibli Park?

The newly opened theme park is split into five areas inspired by Studio Ghibli’s most famous films: Hill of Youth, Ghibli’s Grand Warehouse, Dondoko Forest, Mononoke’s village and the Valley of the Witches.

Currently, only the first three areas are open to the public with the rest set to open next year.

Ghibli’s Grand Warehouse is the park’s main area featuring an indoor town where visitors will find a full sized Catbus from the film My Neighbour Totoro as well as streets, exhibits and scenes from other movies.

A cinema here plays exclusive short films that can only be viewed at the park.

The Hill of Youth is home to the famous antique shop from Whisper of the Heart and offers views over the entire park.

My Neighbour Totoro is the theme of Dondoko Forest where guests will find a reconstruction of Satsuki and Mei’s house from the hit animation as well as a Totoro-themed playground.

Where is Ghibli Park in Japan?

Ghibli Park is located around an hour by train from the city of Nagoya. It is 300km from Tokyo, a journey that takes around two hours by train. The site itself is in Nagakute, Aichi Prefecture, and was previously the location for the 2005 World’s Fair.

Known as Moricoro park, it covers around 200 hectares of land with the new theme park spanning almost seven hectares.

Nature and ecology are recurring themes in Studio Ghibli’s classic films. To reflect this ethos, the park was designed so that “trees shouldn’t be cut down or changes made to the environment.”

How do I visit Ghibli Park?

Tickets can’t yet be bought through the park’s official website. Instead, they can be booked through this ticket booking website which is only in Japanese. Tickets for November are already fully sold out.

There’s no set price for tickets either. Admission for each area is individually priced starting at 1,000 Japanese yen (€6.87) for Hill of Youth and Dondoko Forest and ranging up to 2,500 Japanese yen (€17.19) to enter Ghibli’s Grand Warehouse on weekends and holidays.