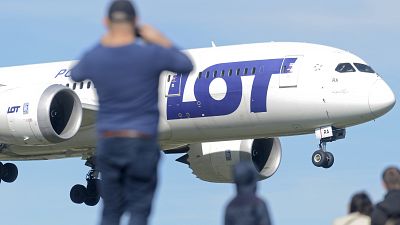 Regulations published late Monday state that the Frederic Chopin and Modlin airports would operate from 07:30 GMT until 15:00 GMT each day and only handle flights to and from key destinations.

The majority of air traffic controllers in Warsaw are threatening to quit their jobs from 1 May after a drawn-out conflict with Poland's air navigation authority over working hours, pay and the authority's financial transparency.

The conflict is coming to a head at a time when world leaders have been coming to Warsaw for talks about supporting neighbouring Ukraine in its fight against Russia's invasion.

The majority of air traffic controllers in Warsaw are threatening to quit their jobs after a drawn-out conflict over working hours and pay.

Due to the war across the border, Poland's eastern skies have been dedicated to the needs of Polish and US military forces stationed in the area with the goal of strengthening Poland's security.

Prime Minister Mateusz Morawiecki suggested on Tuesday that the controllers’ union should cede on some points. He said that controllers typically work 30 hours a week and earn up to 45,000 zlotys (€9,500) pre-tax a month, which are highly favourable terms by Poland's standards.

The Trade Union of Air Traffic Controllers disputed the figures.

It said earnings are much lower, and that individuals with 30 years’ experience can earn about 33,000 zlotys (€7,000) a month before taxes.

The union claimed that in the past two years, controllers have been expected to work shifts single-handedly or sometimes put in 12-hours shifts, conditions it described as a flight safety threat.

The labour dispute started about two years ago with the appointment of a loyalist of Poland's right-wing government as PANSA's chief. Janusz Janiszewski increased the working hours and reduced the pay of air traffic controllers, arguing that traffic was much smaller during the COVID-19 pandemic.

As some controllers quit and some flights were delayed at Warsaw's airports, Janiszewski was fired on 31 March. A state auditing body found issues with his management, Polish media reported.