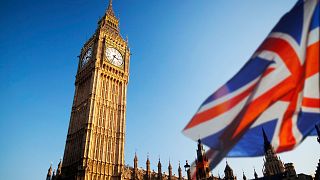 After five years of silence, Big Ben is chiming once more.

The bells in the iconic London tower pealed at 11am on Friday, 11 November initiating Armistice tributes across the country.

The tolling of the bells marked the end of a long period of silence for the tower, which has been undergoing an expensive restoration.

Tourists and locals alike gathered to hear them ring out again.

“It’s incredible. The sound of those chimes is unlike any other,” remarked one American tourist.

“Big Ben chiming is the sound of London basically,” another said.

Why was Big Ben silent for five years?

Big Ben fell quiet in 2017 when an £80 million (€91.5 million) restoration project began on the Elizabeth tower - the official name for the iconic building since 2011. Big Ben is the nickname for the bell itself.

With a couple of exceptions - for example, during the funeral of Queen Elizabeth II - it has been quiet ever since.

The bell will now resume normal service, meaning that Big Ben will chime every hour. Four smaller bells will ring out every 15 minutes.

The restored tower - which was cocooned by scaffolding for the best part of five years - has a glistening golden exterior.

The scaffolding was present for so long that British breakfast brand HP Sauce added the construction frame to its logo, which features Big Ben.

The tower is now free from scaffolding - but remains closed to visitors while final restoration work is completed.

What is the history of Big Ben?

Big Ben is one of the most well-recognised buildings in the world, and is arguably London’s defining landmark.

Its nickname likely stems from Sir Benjamin Hall, a Welsh civil engineer who served as a member of the House of Commons for nearly 30 years in the 19th century.

The first ‘Big Ben’ bell was hoisted up the tower in 1856 - but developed a massive crack.

In 1858, a replacement bell was cast and raised - and this bell remains in the tower to this day.

“I think it’s the most beautiful building in the world, but that’s just me.”

Watch the video above to learn more about Big Ben.