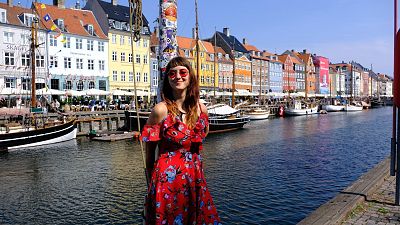 I’ve never been a big flyer. Growing up in Germany as a working-class immigrant child, most of our holidays abroad were made by car. Back in the early 2000s, it was the cheaper and more convenient travel option.

Only in my teens did I venture on the occasional short-haul flight, and even squeezed in a weekend holiday to the south of France (I’ll never understand how anyone could find these trips relaxing). But flying never grew on me. While I understand the convenience it offers to some, it feels wrong to be that high up in the air.

After moving to the UK, I mostly opted for trains and buses to Europe. When I became a climate activist during my uni years, I made the full transition to flight-free travel.

What many people don’t realise is that rail travel is often cheaper than flying, when you factor in airport transfers. To me, travelling over land is not just about low impact living, but also connecting more meaningfully with the places I visit. Seeing the land pass by on the train always leaves me in awe of how people would have travelled in days long gone.

So when I was offered the chance to visit the Aland Islands for a job after a two-year, pandemic-induced break from travelling, I was keen to make the journey by train. I decided to turn it into a multi-stop adventure, and Interrail seemed the logical option.

I had never ventured on an Interrail journey before, frankly because I felt intimidated by the whole process. I quickly realised that my worries had been unfounded: Interrail did most of the work for me by suggesting a ticket based on my destinations, and the user-friendly app allowed me to save journeys I may want to take.

Travel days can be activated and linked to saved journeys, which creates a QR ticket. The only mildly inconvenient aspect was seat reservations, which have to be booked for some high-speed trains such as the Eurostar as well as ferries. But in the grand scheme of things, this was a small price to pay for the convenience and flexibility an Interrail ticket offered.

The first leg of my journey was as close to challenging as it got: due to the energy price crisis in the UK and generous Interrail discounts, lots of people had been opting for the Eurostar rather than flying. Good for the climate, not so good for someone who is unprepared.

Booking my seat reservations three weeks in advance wasn’t anywhere near enough time. As a result I had to make a detour via Paris before moving on to Brussels and Hamburg. The upside was that I got to experience French Thalys trains, which are almost as pleasant to travel on as the Eurostar - although both charge an outrageous amount for seat reservations, which makes the Interrail ticket only worth it if you’re travelling to Hamburg in one day.

I arrived in Hamburg the next day, spending one afternoon there before moving on to Copenhagen. I managed to squeeze in walking up the famous St Michael's Church to enjoy gorgeous views of the city, renting an e-scooter to explore the riverside, and eating incredible vegan food at Musketiers. The scooters would become a much appreciated companion throughout my trip.

From Hamburg, I travelled to Copenhagen accompanied by a childhood friend. Scandinavia’s high-speed trains, with their reliable wifi and few delays, were a welcome break from the often dysfunctional public transport systems in Western Europe.

Denmark’s capital grew on me immediately - many places in the city centre dedicated more space to pedestrians and active travel than cars. The natural consequence of this is that cycling becomes the most prevalent form of transportation, alongside the reliable metro.

Our favourite corner of the city was the anarchist commune Christiania, with its artsy cafes and quirky characters. This enclave is famous for selling marijuana on the famous Pusher Street and defying Danish laws, and has resisted police crackdowns for over sixty years now.

Out of good fortune, rather than good planning, we happened to visit the city during Pride week. The energy was electric, and brought out the most incredible atmosphere the city could offer. It was great to be involved in such an important movement in a new part of the world.

From Copenhagen, we hopped on a train to Stockholm. I had intentionally left a little bit of space in my backpack for secondhand finds, and it was not in vain - Sweden’s capital is a thrifter’s heaven. The fashion industry is one of the most polluting on the planet, and why contribute to the sector’s huge waste of resources when what is already in circulation can be even more fashionable?

Our highlights were exploring the beautiful Gamla Stan old town, watching the golden sunset descend on the city from the hippie quarter Södermalm, and exploring the plentiful vegan food options.

Like Copenhagen, Stockholm is best explored using public transport, and you will find many a surprise in the capital’s Metro, which features historical artefacts and impressive geological formations.

The Aland Islands are very cycle-friendly

Voyaging into the sunset, the picturesque Aland islands were finally on the horizon. There, I worked at the youth sustainability festival ReGeneration 2030 with a group of future sustainability leaders. Outside work, I explored the neighbouring islands on a hired bike.

Like my previous destinations, Aland was very cycle-friendly, with bike lanes separated from roads and traffic sparse outside towns. Although it lacked the adrenaline-fuelled excitement of a London commute, I have to admit it was far more pleasant.

My week on the island was deeply regenerative, and desperately needed. I loved seeing so many new places, but hopping around really takes its toll on the body.

Helsinki was the highlight of my trip

The tranquillity of Aland had me recharged and ready for my personal highlight, Helsinki. For the ferry ride there, I was placed in a cabin below water level, which I realised is far outside my comfort zone. Being underwater is for fish - just like being up in the air is for birds.

The climate in Helsinki is cold (and I’m not a cold weather person), but it was always easy to chase off the chill in the omnipresent saunas - I even found one on top of a Ferris wheel.

I spent my mornings in a cafe with a harbour view, followed by a visit to the adjacent sauna and sea pool. Working from cafes had become my default by then, and I enjoyed trying dozens of varieties of oat americano while watching locals and other tourists go about their business. In my opinion, remote working is a major positive that has come out of the pandemic - allowing many people to travel more slowly where previously they would have flown.

Finland’s way of life is slow, mindful, close to nature. You’re never far away from a woodland or lake.

With their intact nature and dozens of old bunkers, Helsinki’s neighbouring islands of Suomenlinna and Vallisaari are not to be missed. And if you fancy some seasonal food, Restaurant Magu is worth a visit. I had an incredible mushroom risotto which was so rich and flavourful. Eating out isn't cheap in Finland, but it was worth every penny.

My time in Scandinavia was followed by 10 days of speed-exploring the Baltic nations. I travelled into Tallinn via ferry again (which takes only two hours), and went about exploring the most intact old town in Europe.

Tallinn had a lot to offer, not least its extensive nearby woodland, which is brimming with biodiversity. On a morning jog, I encountered dragonflies larger than my palm and even a lonely snake slithering through the greenery. It reminded me of the many summers I spent back in my home country of Poland as a child, when wilderness was found more widely in Eastern Europe.

Latvia’s capital Riga felt a lot more Western, and in many places reminded me of London. Digital nomads will be delighted by its lovely cafes and bustling city centre, with parks and green spaces dotted around the urban jungle.

In stark contrast, Vilnius is one of the most laid-back cities I encountered. Boasting the largest old town in Europe, its architectural beauty is absolutely breathtaking. And similarly to Copenhagen, it had its very own alternative community: the republic of Uzupis, which is home to many an art gallery, quirky cafe and creative soul.

I ended my journey at the Global Climate Strike in Brussels

Having seen so many places in such a short space of time, making my way home felt strange. Travelling over land reminded me of how beautiful this planet we live on still is, and why I’m doing what I do in the first place.

After a brief family visit near Frankfurt and a one-day stopover in Liége, my last destination was Brussels for the Global Climate Strike - how fitting!

While aviation is a highly polluting sector, the debate around flying is often heavily concentrated around individual behaviour change. And while I believe that we should be giving up flying if we have the time and financial resources, let’s not forget that the majority of aviation emissions come from frequent business flyers and private jets.

Let’s be real, I’ll probably end up flying for work at some point. Flying is a nuanced issue, and in my opinion the positive impact of some journeys can outweigh the carbon cost of getting there. But my goal is to avoid flying within Europe for the foreseeable future - after experiencing the joys of train travel, I never want to go back.