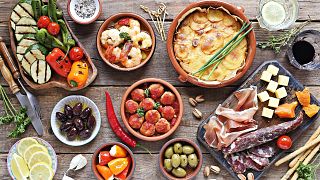 Spain’s historic capital has it all. A jigsaw of interlocking neighbourhoods, each with its own identity - from the LGBTQ+ district of Chueca to the aristocratic Chamberi. Madrid is a buzzing 24-hour city.

Once home to the 1970s countercultural movement ‘La Movida’, which saw bands and alternative art explode across the region, Madrid is still a mecca for artists and art dealers alike today.

The city’s food scene is thriving too and outside the centre, lesser-known parks and green spaces are finally getting the recognition they deserve. Previously a destination for ‘long weekend’ tourists, Madrid is keen to present itself as more than a minibreak city.

“The people that come to Madrid normally spend, according to the current numbers that we have, two and a half nights in Madrid,” says Héctor Coronel, General Director of Tourism for Madrid Council.

So if you’ve booked four nights in Spain’s capital, what should you do? Here are some of our favourite places to explore in the city of the bear and the strawberry tree.

Madrid’s food scene has exploded in recent years, with markets, bars and eateries popping up across the city. These gastronomic capabilities haven’t appeared overnight though, its food culture stretches back hundreds of years, as Coronel explains.

Everything happens around the table. The best experience is when you sit with your people having tapas.

“Everything happens around the table. The best experience is when you sit with your people having tapas. Of course we have Michelin star restaurants but we also have the oldest restaurant in the world, Restaurante Botín and now Madrid is booming.”

This culinary explosion has seen new street markets, restaurants and culinary concepts popping up all over the city, even during the pandemic, explains Coronel.

“Now if you go to any regular restaurant, it’s not easy to find a reservation at the weekend. But this isn’t because we have big chefs, but because the people like to enjoy themselves, it is at the heart of our culture.”

While tapas in Madrid is glorious, you don’t need to eat it every night. The new luxury Galería Canalejas Food Hall is home to 13 restaurants, including Italian, Japanese and fusion foods, all in an incredibly glamorous setting.

If your budget doesn’t stretch to Michelin star prices though, you can head to Yatai Market for delicious Asian street food. On weekends you’ll find people queuing out the door to sample what they have to offer.

Spain might still be synonymous with meat eating, there are plenty of options for vegans these days too. Visit Mad Mad Vegan in Pelayo for plant-based fast food. Or head to Bunny’s Deli for something altogether more refined.

Madrid has one of the most established art collections in Europe, with globally famous galleries and lesser known markets. The cream of the crop is the Prado, Spain’s national art museum containing works by Goya, Rubens, Titian and El Greco.

For something more contemporary, the Reina Sofia houses some of the greats of 20th century art, including works by Dalí and Picasso. While most people come to see Guernica, Picasso’s devastating Civil War painting, you can also see Civil War artworks created by female artists on display here too.

If you want to experience the cutting edge of the art scene, there’s one more place you should go, according to Coronel.

“Salesas is a part of Madrid, which has private galleries, very well known in Germany, in France, in the Nordic countries, where normally people come to Madrid one or two times per year in order to see and buy art. It’s very unusual, not many people in Madrid know about this part.”

What about green space?

After all that food and art, you’ll definitely need a walk, so where should you head? El Retiro is Madrid’s most loved park and a UNESCO World Heritage Site. Alongside its 15,000 trees, there’s also a large lake to row on and a rose garden to relax in.

El Retiro isn’t the city’s only park though, and Coronel is keen for people to know more of the capital’s green spaces.

We want to expose the different parts of Madrid. We have 21 districts, 176 neighbourhoods and we want to create a relationship between all these places.

“We want to expose the different parts of Madrid. We have 21 districts, 176 neighbourhoods and we want to create a relationship between all these places. For instance we have El Capricho which is a very small but very nice park or the Quinta de los Molinos, both of which are very unknown to the Madrilenians, the people of Madrid and international tourists too.”

If you’re thinking of visiting Madrid this spring, head to Quinta de los Molinos to see the blossom on the park’s almond trees.

What are the travel restrictions for Madrid?

Travellers from the EU and the UK need to show that they are fully vaccinated to enter Spain. Passengers will need a COVID-19 vaccination certificate and will also have to fill in a travel health form before entering the country.

It is currently mandatory to wear a mask in all indoor settings and also all public outdoor settings. FPP2 masks may be needed to enter some venues.

The rules for high risk countries may vary, you can find more information **here. **