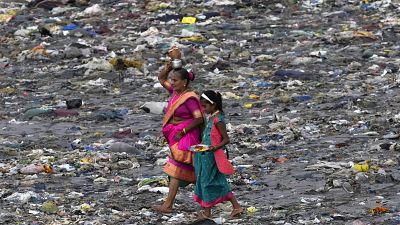 Coca-Cola, Unilever, and Nestle have all been named in the top five most polluting companies for plastic waste   -   Copyright  Rajanish Kakade   -
By Tim Gallagher  •  Updated: 18/11/2022

The world’s worst plastic polluters have been revealed, with Coca-Cola coming top of the list for the fifth year in a row.

This is especially embarrassing given the food and drinks company’s sponsorship of COP27, currently being held in Egypt.

“Instead of allowing companies like Coke to greenwash their image, governments need to compel polluters to invest in reuse and alternative product delivery systems that avoid the problem in the first place,” says Von Hernandez, global coordinator for Break Free From Plastic.

The result comes from Break Free From Plastic’s 2022 annual audit, which also saw Mondelez International, Unilever, Nestle, and PepsiCo in the top five.

What are governments around the world doing about plastic waste?

The five top polluters have been found out through an audit which saw 200,000 citizen scientists in 87 countries analysing trash they gathered on beaches and elsewhere.

Coca-Cola’s ‘trashiversary’ sees them not only land at the top spot for five years in a row, they also doubled their trash footprint in the same time period.

Break Free From Plastic are using the findings to join calls for a Global Plastics Treaty with legally binding mechanisms and enforcement policies, arguing the audit is evidence companies can’t be trusted to set their own targets.

“Governments worldwide now have the justification and opportunity to effectively address and reverse the plastic pollution crisis by coming up with a global plastics treaty,” continues Hernandez.

Has there been any progress on a Global Plastics Treaty?

In March this year negotiations began at the United Nations Environment Agency for a framework to solve plastic pollution. But the talks have not come to fruition yet.

In 2018 the UN launched a New Plastics Economy Global Commitment with voluntary sign-up from consumer companies including the biggest plastic polluters. A progress report in 2022 said that targets set for 2025 will “almost certainly” not be met.

“The world’s top plastic polluters have littered the planet with plastic waste - and marked it clearly with their name,” adds Rosa Pritchard, plastic lawyer for ClientEarth.

“Consumers, shareholders, and NGOs are turning to litigation to jolt these companies out of their stupor on plastics.

“For these companies, the risk of litigation looms especially large: we know they are driving the plastics problem. We know the harms caused by plastic pollution and the plastics lifecycle. Lawsuits holding them accountable are just a matter of time.”

Coca-Cola did not immediately respond to a request to comment.