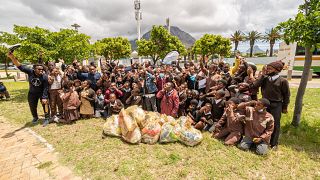 The programme is the brainchild of SoapBox based in Cape Town. It started in 2018 and since then, Captain Fanplastic has been welcomed to more than 20 schools in South Africa and in the Netherlands.

There are also e-books, audiobooks, an e-learning platform and in person programmes where children are taught that plastic is treasure - not trash.

Captain Fanplastic facilitator Yanga Gceya shares a joke that forms the basis of the initiative: "Why do you think pirates are called pirates? Because they ‘Rrrrr’." It helps to articulate to the children important messages associated with plastic waste.

"We're able to take this [initiative] into schools to show little pirates in primary schools, in particular to the ages of 7 to 12 years old, that they can ‘Rrrr’ so that they can refuse, reduce, reuse, repurpose, and recycle plastic."

Africa is choking on plastic

More than 17 million tonnes of waste are generated by Sub-Saharan Africa every year but only 12 per cent of plastic waste is recycled. It is estimated that the plastic entering our oceans could triple to 29 million tonnes by 2040.

To help communities throughout Sub-Saharan Africa prevent plastic waste from entering the marine environment, the Afri-Plastics Challenge has been set up by innovation foundation Nesta Challenges. It is being funded by the Government of Canada.

They have just announced 30 semi-finalists in the Challenge including VR storytelling and community education programmes. 'Captain Fanplastic' is one of the selected few.

Three winners will be chosen in March 2023, receiving nearly €300,000 (£250,000) each to expand their programmes and inspire a change in behaviour around plastics.

"If we win, I think we want to make an animation," says Gceya. The programme has already published two books about the legends of 'Captain Fanplastic' and a third one could be on the way too with the help of the awards.

"The funds from the Afri-Plastics Challenge can help us scale our programme outside of trying to get to new countries and new partners on board, " he adds.

Watch the video above to learn more about the programme.