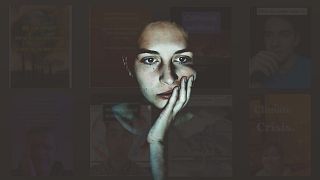 Abbie Richards, Alaina Wood and Carissa Cabrera are members of EcoTok, a collaboration of environmental content creators. In the wake of the latest IPCC report, they explain why trustworthy climate communicators are essential as oversimplified content about the climate crisis continues to circulate, exacerbating vulnerable viewers’ anxieties about the planet.

Today the most comprehensive report on climate change ever written was released by the UN.

It outlined the possibility of an approaching "climate catastrophe" including facts such as the last five years being the hottest record since 1850, sea levels rising by three times as much in recent years and atmospheric carbon dioxide at its highest levels in two million years. Headlines called it "code red" for humanity.

Another important upcoming IPCC report was leaked earlier this year leading Agence France-Presse (AFP) to publish an article titled: 'Crushing climate impacts to hit sooner than feared: draft UN report'. The agency stated that it ended with a call for transformative change, saying, “We must redefine our way of life and consumption.”

As other news outlets published stories on the leaked report, the headlines and their corresponding images became increasingly sensationalist. A PBS headline read: “The worst is yet to come” and Earth911 said that “the leaked IPCC report spells out disaster.”

Within a few days, a video about the leaked report went viral on TikTok.

The video, which the creator has since made private, begins with a trigger warning for “Really bad news on climate change” and proceeds to list the most severe and inflammatory portions of the leaked report. In 60 seconds, this video attempts to summarise all of the terrifying effects of climate change over soft piano music.

TikTok users didn’t respond well to the news; the most liked comment on the video said, “Honestly… kinda makes me want to unalive myself even sooner.” [Editor’s note: ‘unalive’ is a phrase commonly used on TikTok to refer to suicide while avoiding the platform’s censors.]

Another user wrote, “I don’t want to be here anymore. I literally don’t want to live anymore. There’s no point.” Someone else asked, “Is there any way we can help…. cause my balcony be looking good now.”

These are just three out of 1,577 comments detailing users’ crushing feelings of anxiety, grief, anger, and hopelessness. Fear goes viral quite easily.

These warnings from the IPCC are nothing that scientists don’t already know.

We can confidently say this because we are environmental scientists. We have backgrounds in climate science, environmental sociology, sustainability, and marine biology, so nothing supposedly outlined in this report is shocking.

However, we are also all in our twenties. We’ve spent our entire lives engulfed in the ocean of emotions brought on by a looming climate disaster.

We, too, are furious at those who came before us and failed to act. We, too, are devastated for the lives and entire cultures threatened and the species that will never return. And we, too, are guilty for our participation in the systems that have brought about all of this pain.

We empathise with the intense emotional responses of those in that TikTok comments section.

We are also climate communicators. Our job is to understand environmental issues and solutions and then translate these complex concepts into formats understandable to the public.

And one of our responsibilities, more and more with each new report, heatwave, hurricane, and forest fire, is to communicate this information in manners that don’t produce hopelessness, inaction, or even self-harm.

Anxiety about the climate crisis is valid, but shouldn’t be exploited

Eco-anxiety and eco-grief are real and valid - nearly half of US young adults feel stress over climate change in their daily lives. But poor science communication which oversimplifies complex environmental systems into clickbait horror stories does not honour these emotions, it exploits them. And not without consequence.

While eco-emotions are logical, sometimes even motivating, human reactions to the climate crisis, eco-doom disempowers and disengages us.

After all, if we believe it is too late to take action, then why bother?

Even though no scientific study has found that climate change is likely to wipe out human civilisation, entire sects of the population are convinced it’ll bring about societal collapse, and bad actors are already capitalising on climate doom to impede climate action.

Climate change is wildly complicated, brimming with uncertainty, and undeniably upsetting. Climate communicators exist to explain the complex, acknowledge the emotions, and educate about potential solutions.

As we move into an unpredictable climate future, it is important that the public has trusted voices to turn to for explanations of the nuance. Establishing climate communicators as crucial components of our information ecosystems would increase our resiliency to misinformation about climate change.

The role of climate communicators cannot be exclusive to news anchors, professors, or any other profession embedded in institutionalised power. A diverse population calls for diverse climate communicators who can reach out and represent communities that traditional media has historically overlooked.

Our goal should be to make high quality, responsible climate education as accessible as possible; this means innovating beyond traditional media formats and finding new ways to help information find people.

As young people ourselves, the new generation of climate communications understand how to reach our peers. The three of us, for instance, are part of a collaborative environmental TikTok account that provides free climate education to over a hundred thousand followers.

If we removed paywalls on COVID information, how can we justify keeping them up on environmental information? Understanding the realities of climate change is not a privilege - it’s a right.

An uninformed public cannot possibly be expected to make rational and effective decisions. Whether we’re fighting doom or denial, climate communication is essential in the race to implement effective mitigation and adaptation measures.

And even more importantly, we need more trusted voices in this space.

Golf is a giant board game damaging the planet: Time for it to go