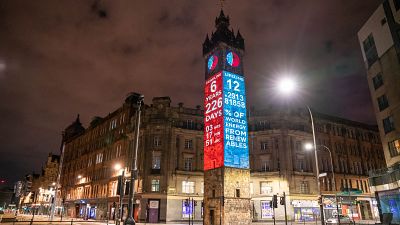 The Tolbooth Steeple in the beating heart of Glasgow has been transformed into a ticking clock counting down to 100 per cent renewable energy usage worldwide.

The symbolic ‘lifeline’, currently at 12.3 per cent, is accompanied by a ‘deadline’ which counts down to the date by which global temperatures must be limited to 1.5 C to stop irreversible climate change.

A melting pot of art, science, technology and grassroots activism, the Climate Clock is supported by Glasgow City Council, 350.org, Greenpeace UK, and Ecotricity and will be projected onto the Tolbooth Steeple every night between now and COP26.

COP26 begins in Glasgow at the start of November and will see world leaders and activists come together to discuss how to reduce greenhouse gas emissions.

Changing culture with a new monument

The Tolbooth Steeple is central to Glasgow's history and was the site where proclamations were read out when literacy rates amongst the population were low.

This history is particularly significant now as it is being used to get the word out on the climate crisis.

“As Glasgow prepares to host COP26, the Tolbooth Steeple is the perfect location for the Climate Clock.”

“For centuries, it was here that important proclamations were read out to the people of Glasgow. It stands at the convergence point where people from all points on the compass entered the city; and it is unmistakably Glasgow.”

The Glasgow Climate Clock is a twin to the countdown clock in New York’s Union Square - other clocks can be found in South Korea, Ghana and Nigeria.

Climate activist Greta Thunberg also has her own Climate Clock that she displayed at her speech at the UN in 2019.

The proliferation of Climate Clocks shows a much needed shift in our priorities as a society, says one of the artists behind the New York clock, Katie Peyton Hofstadter.

“The new Climate Clock monument in Glasgow is telling us we must make building a 100 per cent renewable future a central mission of our culture — or else.”

“Monuments tell people what we value as a culture.”

The original in New York had the renewable countdown added in April this year and is intended to “put a spotlight” on global leaders in climate talks at COP26.

Eco-anxiety is rising with more people than ever concerned about climate change and debates about whether the COVID-19 crisis offers an opportunity for a green recovery.

Professor Kerry Ryan Chance, Associate Professor of Social Anthropology at the University of Bergen, Norway, studies how governments, businesses and citizens respond to and manage fear about the climate crisis in her research on ‘eco-anxiety politics’.

Although Professor Chance’s work identifies some issues around exploitation of these fears by governments and corporations, she believes eco-anxiety can provide grounds for political mobilisation.

“At their most effective, eco-anxiety political mobilisations focus not on individual consumers, but on collective action in multiple public and private domains, for instance on the streets, in the courts, as well as in the home, but also through novel media platforms, notably the power of digital technologies.

Chance concludes, “Climate clocks, pitched as a monument and growing movement, are a good example of forms of play, creativity, and art that can emerge from eco-anxiety.”