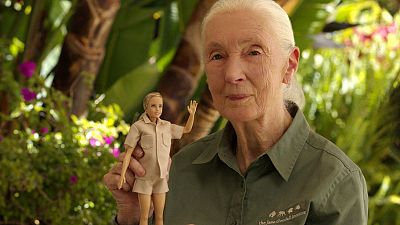 A Barbie doll of Jane Goodall has been launched to inspire young girls, fulfilling a lifelong wish for the British primatologist.

"When I heard that Jane Barbie doll, was going to be made, I was really happy because actually, I'd been suggesting it for a long time,” the renowned conservationist said.

“Girls don't want just to be film stars and things like that; but many of them, like me, want to be out in nature studying animals.”

The Dr Jane Goodall doll was launched just ahead of World Chimpanzee Day on 14 July.

The doll comes with a toy inspired by David Greybeard, the first chimpanzee to trust the primatologist during her research at Gombe National Park in what is now Tanzania, Africa.

"When I was growing up, you know, there weren't any female role models,“ said Goodall.

“I was helped by a mother who supported my dream, but my heroes, my models, were Tarzan and Dr Dolittle.”

The company behind these iconic dolls, Mattel, unveiled the new Barbie on the 62nd anniversary of Dr Goodall's first journey to the forest of Gombe National Park.

The toymaker says the doll is made from 75 per cent recycled ocean-bound plastic and is part of its Inspiring Women Series.

Who is Jane Goodall and why is she an inspiration for young girls?

Jane Goodall, 88, is known for her work as primatologist, anthropologist and conservationist. She is considered to be one of the world’s foremost experts on chimpanzees.

She first travelled to east Africa in 1960 at the age of 26 and began her research equipped with little more than a notebook and binoculars, - just like her doll.

When Goodall entered the forest of Gombe, the world knew very little about chimpanzees. She immersed herself in their habitat and discovered that they were individuals with distinct emotions. For the first time, Goodall observed the animals making and using tools, hunting and eating meat and showing compassion to others.

Animals aren't just things put on this planet for us to exploit for food or clothing or whatever, but that they're individuals with personalities and feelings – every single one of them.

Today she travels the world, speaking about the threats facing chimpanzees and the environment, urging the world to take action.

Goodall hopes that her doll will encourage young girls to get involved in conservation and environmental projects.

"Any child who wants to help, and wants to help save the planet and help animals and help people and help the environment, should join a youth group that is working to do just those things,” she said.

The Jane Goodall Institute has its own global youth service movement Roots & Shoots to help teach children about their environmental impact.

Watch the video above to learn more about Dr Jane Goodall and her Barbie doll.