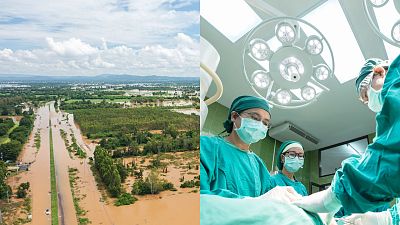 The climate crisis will worsen most diseases, experts have warned - and could catalyse the next deadly pandemic.

Nobody likes getting sick.

But as the planet heats up, the majority of diseases - from mild viruses to deadly plagues - will become more common.

According to a 2022 study, over half (58 per cent) of known infectious diseases are aggravated by climate change.

The research - drawn from a review of more than 77,000 existing papers - paints a “terrifying” picture of the next few decades, warns lead author Camilo Mora.

“We are not going to go extinct, I don’t think. Instead, this is going to make our lives miserable,” he says.

“The disease crisis is like a meteorite hurtling towards us. Indeed, the meteorite is here.

“We cannot ignore it.”

From long-dormant pathogens unleashed by defrosting tundra, to millions of extra virus-carrying mosquitos, the risks will be severe.

So how is disease going to change in coming decades - and what can we do about it?

7. Animals and humans forced closer together

Habitat degradation and climate change is forcing animals and humans closer together, increasing the risk of viruses ‘jumping’ between species.

Floods, fires and droughts push wildlife to seek resources elsewhere. Meanwhile, humans are encroaching on nature ever further, including by logging forests for pastureland and construction.

This dynamic leads to deadly emerging diseases, explains Professor Daniel Brooks, a professor emeritus of Evolutionary Biology at the University of Toronto.

In his 2019 book ‘The Stockholm Paradigm’, Brooks and colleagues explain how pathogens can easily colonise new hosts.

“Climate change alters the conditions of life for species, and when those changes exceed a species ‘comfort zone’, members of the species move away, seeking more livable conditions,” he says.

“By catalysing movement in general, climate change thus sets the stage for hosts to come into contact with pathogens to which they are susceptible but which they had never been exposed to before.”

The pathogens don’t even have to mutate, he says - new hosts often already have the traits required for a ‘jump’.

“In the case of SARS-CoV-2, for example, the virus has a very specialised requirement for hosts with a cell surface antigen called ACE2,” Brooks explains.

“The original bat host for SARS-CoV-2 has ACE2 and lives a very isolated life - it is nocturnal and lives in caves, where it does not even interact with other bats.

“Change the conditions, however (bring the bats into contact with other species in a live animal market, for example) and the fact that virtually all species of mammals have ACE2 means the risk space for emerging infectious diseases skyrockets.”

Global warming is melting ice caps and permafrost, exposing pathogens that have been frozen underground for thousands of years.

In 2016, a 12-year-old Russian boy died after being infected with anthrax. The disease had stemmed from an infected reindeer corpse that had been defrosted from deep in the Siberian tundra.

Climate change increases the frequency and severity of flooding.

Floodwater often contains sewage, and eating or drinking anything contaminated by floodwater can cause diarrheal diseases like E. coli and Salmonella. Cholera, typhoid, and leptospirosis also thrive after floods.

Once floodwaters recede, the remaining stagnant water becomes a breeding ground for mosquitos carrying diseases like malaria and dengue fever.

According to a 2019 study in the journal PLOS Neglected Tropical Diseases, disease-carrying mosquitoes will reach 500 million more people by 2050 than they do today.

This is because warm weather will increase the number of places these deadly disease vectors can breed.

Ticks also thrive in warmer weather. In the US, incidences of tick-borne Lyme disease - a bacterial illness that can lead to serious joint and nervous system complications - has more than doubled in the past 30 years.

Toxic algal blooms - the bright blue-green organisms you might see floating in bodies of water - can kill all of the fish in a lake. They can also seriously harm or kill humans.

So do rising sea levels, as shallow and stable coastal water bodies create the perfect environment for blooms.

When mammals get sick, one of our best defence mechanisms is a fever.

A fever heats your body up, stimulating immune response. But as the weather becomes warmer, viruses will undergo a process of natural selection.

“For example, look at a bat fighting with a pathogen like a virus. When there is a heatwave, the bat is stressed, and is more likely to get sick,” Mora says.

But those that survive will be hosting, brewing, heat-resistant viruses.

“The pathogens will be getting stronger.”

This survival of the fittest will breed heat-resistant viruses that are better able to evade human defences.

Extreme weather events put massive amounts of stress on the human body - for example, your body has to work hard to keep you cool during a heatwave.

But as climate change bites, billions will live in more difficult conditions.

According to the United Nations High Commissioner for Refugees (UNHCR), around 21.5 million people have been forcibly displaced by weather-related events since 2008.

The Institute for Economics and Peace - a London based think tank - estimates that around 1.2 billion people could be displaced by climate change over the next 30 years.

Refugee camps, for example, can be hives for disease outbreaks.

Climate change will make us all more vulnerable, warns Professor Joacim Rocklöv, a Humboldt Professor at the University of Heidelberg.

“It also affects the vulnerability of populations through systemic compounding impacts. This can lead to worsened impacts of already existing disease, for example through mechanisms of food and water scarcity.”

What can we do about climate change-induced health risks?

Faced with these multiple emerging health risks, what should we do? Prevention is far better than crisis response, warns Dr Brooks.

The example of metabolic diseases proves this, he says.

“‘Change your diet, don’t smoke, drink less, get exercise’ is cheaper and more effective than cardiac bypass surgery, even though it is not as heroic,” he says.

“We need to apply the same rationale to EID [emerging infectious diseases].”

For example, a coronavirus resembling SARS-CoV-2 was discovered in China in 2005. If governments had monitored the likelihood of the strain causing disease in humans, and regulated wet markets, the pandemic may have been avoided.

The other crucial action is to strike at the source and reduce greenhouse gas emissions, says Dr Mora.

“The solution is not adaptation. There is no adapting to this, there are just way too many diseases,” he says.

“How will future generations look at us, if we leave them a miserable world? We must refuse that.”

This requires rapid decarbonisation and investment in renewable energies.