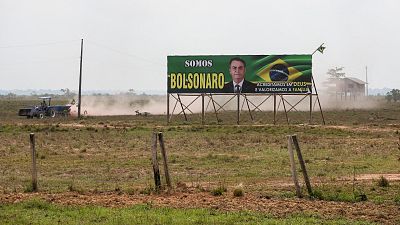 View of a billboard in support of Brazilian President and re-election candidate Jair Bolsonaro at a farm in the municipality of Humaitá.   -   Copyright  MICHAEL DANTAS / AFP   -
By Rosie Frost  •  Updated: 04/10/2022

The fate of the Amazon rainforest could rest on the outcome of Brazil’s election, according to experts.

As the election heads into its second round of voting, incumbent Jair Bolsonaro faces off against Luiz Inácio Lula da Silva. With almost all of the votes from the first round counted, Lula appears to have won 48 per cent of the vote compared to Bolsonaro’s 43 per cent.

He failed to achieve the 50 per cent of valid votes needed to prevent this run-off voting and Brazil now has four weeks to decide who will lead the country.

Brazil is home to the world’s biggest rainforest, the Amazon. It is also currently the world’s sixth largest greenhouse gas emitter - mostly due to deforestation and methane from agriculture.

With countries around the world importing products like beef and soy from the region, and the Amazon playing a vital role in our planet’s ecosystem, this election has global significance.

And now experts are saying that a victory for Bolsonaro could continue the dismantling of environmental protections and cause further catastrophic deforestation.

"Sunday’s result was very disappointing. Even if Lula wins the second round of voting - which is far from certain - the fate of the Amazon and Indigenous Peoples’ rights hangs in the balance more than ever," says Perrine Fournier, trade and forest campaigner at forests and rights NGO Fern.

How has Bolsonaro’s presidency changed the Amazon?

Deforestation in the Amazon has hit an all-time high. In 2019 alone, the first year of the Bolsonaro presidential administration, 9,762 square kilometres of land was deforested - a 30 per cent increase from the previous year.

“Jair Bolsonaro’s reign as Brazil’s president has seen the greatest reversal of social and environmental protections in our nation’s history,” writes Adriana Ramos of Instituto Socioambiental - a Brazilian cultural and environmental NGO - in a piece for Climate Home News.

She adds that overall, deforestation has risen by more than 50 per cent during his presidency. There has also been an increase in violent conflicts over land, illegal invasion of Indigenous territory and a record number of murders of Indigenous people.

The number of fires has increased massively too - almost 1 million hectares have been burnt in the last year. September was particularly bad with Brazil’s national space agency, INPE, reporting 36,850 fires in the region in 26 days. That is more than double the number during the entire month in 2021.

A study from last year found that parts of the Amazon now emit more carbon than they absorb due to deforestation. Trees being felled and widespread fires are interfering with the forest’s ability to mitigate emissions.

Ramos believes that if Bolsonaro wins another term in office, “the world’s biggest rainforest could pass its tipping point.”

What could Luiz Inácio Lula da Silva mean for the Amazon?

During former president Lula and the Workers’ party’s previous years in office, the Amazon saw a sharp decline in deforestation. It is thought to have fallen by around 72 per cent between 2004 and 2016.

If Lula wins and manages to replicate this success, it could be good news for the rainforest. He has already promised to reverse destructive environmental policies and take action on illegal mining in Indigenous territories.

“Everything this government has decreed against Indigenous peoples must be repealed immediately,” he told communities back in April.

An analysis from Carbon Brief estimates that a victory for Lula could avoid 75,960 square kilometres of the Amazon being lost by 2030 - an area the size of Panama. Researchers say forest destruction could fall by 90 per cent over the next decade.

But the challenges the Amazon faces are not the same as they were before.

“I think that Lula is very cautious to understand that this is a huge challenge and is completely different than it was in the past,” former environment minister and Lula’s adviser Izabella Teixeira told New Scientist.

He is hoping to tackle the complex web of international relationships, industry and social factors that are the root cause of deforestation, she added.

Fournier adds that Brazilians have already chosen an ultra-conservative Congress and Bolsonaro has taken the Senate.

"This means that if Lula is victorious in the second round on October 30, he faces an uphill struggle to reverse the pernicious environmental and social policies Bolsonaro has enacted while President.

At a stroke, these would turn currently illegal activities into legal ones.

She adds that the Conservative majority will be well placed to inflict further damage with bills that increase the threat to the Amazon and human rights; "including one related to using Indigenous territories for mining, one weakening the environmental licensing regulation and a land-grabbing bill."

"At a stroke, these would turn currently illegal activities into legal ones."

What impact could Lula have on EU trade deals?

One of the challenges facing Lula, if he is elected as president, is a trade deal between the EU and Mercosur - a group of nations made up of Brazil, Argentina, Paraguay and Uruguay.

After 20 years of negotiations, the deal agreed on a cut in tariffs on goods imported from these countries to the EU. But progress stalled in 2020 after concerns were raised that it could increase deforestation from soy and beef. There are also worries about what the deal could mean for Indigenous peoples’ rights.

It has to be a balanced agreement that takes into account global warming and the need for sustainable development.

Lula has already suggested that he would like to reopen negotiations - with more protections for human rights and the environment.

Global efforts to clean supply chains from deforestation and human rights abuses are more vital than ever, Fournier says.

"It’s inconceivable, therefore, to have a trade agreement – in this case, the EU-Mercosur trade deal - with a country which now looks very likely to have a forest governance framework which is weak and crumbling."

She explains that a number of studies have shown robust governance is needed to mitigate the negative effects of international trade and the EU must not compound the suffering of Indigenous Peoples' or threats to the Amazon.

But Celso Amorim, foreign minister during his two terms as president from 2003 to 2010, told Reuters he thinks they can strengthen the clauses on climate.

“It has to be a balanced agreement that takes into account global warming and the need for sustainable development while, on the other hand, allowing industrial development with up-to-date technology that must be green,” he said.