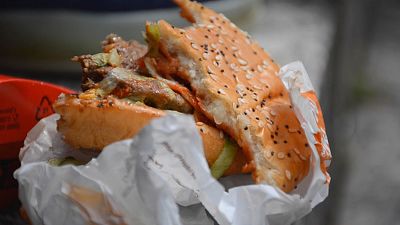 They are called the 'forever chemicals'. Per- and polyfluoroalkyl substances, also known as PFAS (pronounced simply as P-fas), are part of a family of thousands of chemicals found in everyday objects, such as food packaging.

They are in our bodies and in nature, but you may not be familiar with them – and you are not alone.

Recently, nine European NGOs analysed about 40 types of food packaging sold in the EU. About 32 of them had been treated with PFAS.

Speaking to Euronews, François Veillerette, a spokesperson for the NGO Génération Futures, told us that these chemicals exist in everyday packaging, especially among fast food wrappers.

"In paper or cardboard packaging, it is an anti-fat or anti-stain use, to avoid a fat halo forming on the bag of chips for example, or to avoid getting your fingers dirty. So it has a very limited advantage compared to a possible risk of contamination of the consumer's body."

The potential harmfulness of these substances is debated by the scientific community. The European Food Safety Authority takes the risk seriously. In 10 years, it has divided the tolerable dose of PFAS by 1 700, these researchers told Euronews.

"In the perinatal period, there may be exposure of the mother and therefore consequences for the offspring,” says Muriel Mercier-Bonin, a researcher in Food Toxicology at the INRAE.

"We have cases of the appearance of cancers, effects on the thyroid gland, and effects that will reduce the immune system,” adds Hervé Robert, a senior lecturer at the University of Toulouse in food toxicology. “We even think that during the recent vaccination campaigns, the effects could have been lessened if we were exposed to this type of compound."

"Tetra Pak has thousands of packaging references. There are no PFAS in Tetra Pak packaging. Except for a few references. They are in such minimal quantities that they are well below what concerns the European authorities today.

The company is committed to phasing out PFAS in the near future. Other packaging producers might be required to do so by law in the next decade.

Meanwhile, the European Commission announced at the end of April that it was considering a gradual ban on certain uses of PFAS, as part of a major review of chemicals legislation currently being negotiated between Brussels and the member states.

EU reveals plans for the ‘largest ever ban’ on toxic chemicals