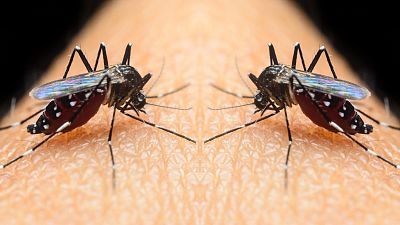 Now mosquitoes are also becoming a mounting health concern in Europe, as the Asian tiger mosquito, an extremely invasive and disease-carrying species, proliferates across the continent.

Climate change means temperatures are rising and Asian tiger mosquitoes are thriving across Mediterranean countries as a result. They are expected to establish themselves across England and Wales in the coming decades.

This is particularly worrisome to health authorities across the continent as this type of mosquito can carry serious diseases including dengue fever, Chikungunya, West Nile virus and Zika.

Let’s not forget that mosquitoes are the world’s deadliest creature, killing one million people a year through the diseases they transmit.

In the past 50 years, the worldwide incidence of dengue has risen 30-fold. Forty per cent of the global population, about 3 billion people, live in areas with a risk of dengue.

How to identify a tiger mosquito

Originally from Southeast Asia, the Asian tiger mosquito, known as Aedes albopictus, is black with silvery white markings, and smaller than the common house mosquito - between two and ten millimetres long.

That makes it more silent - and sneaky. Unlike many other mosquito species, the Asian tiger also typically bites during the daytime.

If you’re unsure whether the mosquito you’ve just smacked is an Asian tiger, you can take a photo of it and upload it on Mosquito Alert, a tracking app that’s now available in most European countries.

In doing so, citizens help build a map of the mosquitoes' spread worldwide to help combat them.

This recent map from the European Centre for Disease Prevention and Control (ECDC) shows just how much tiger mosquitoes have taken hold across Mediterranean countries:

Tiger mosquitoes are now found in half of France, and a report by the French parliament last year warned their spread poses "a major health risk" for decades to come.

Asian tiger mosquitoes are already such an acute problem in the country’s south that local authorities have launched a three-year experiment to trap them.

Here’s how it works. Females are drawn to a water-filled container called Vectrap in which a screen prevents them from laying their eggs, and sticky walls prevent them from escaping. That allows scientists to capture them before they can reproduce.

Initiatives like these typically rely on the participation of locals to lay the traps and report sightings.

The fight against tiger mosquitoes has taken a more serious turn in Asian regions where they’re endemic. Experiments aiming to infect them with a specific type of bacteria and sterilise the females have yielded encouraging results in China.

Easy ways to protect yourself

The most effective way of avoiding having a hotspot of Asian tiger mosquitoes in your backyard is to stop them from breeding by getting rid of stagnant water.

Mosquito eggs need water to hatch, and females love flowerpots, birdbaths and clogged gutters, but something as small as a bottle cap can hold enough water for their larvae to develop. So make sure to keep your exterior impeccably clean, clear up gutters, drains and watering cans, and why not screen your windows and doors.

If you’re going to spend time outdoors in an infested area, strive to wear pants and long sleeves - if you can bear the layers in a heatwave - and avoid dark-coloured clothing which tends to attract them.

Apply repellents such as those containing DEET, IR3535 or Icaridin. Essential-oil based repellents are a more natural option, but they offer short-lived protection as they evaporate from the skin more quickly.

Citronella candles smell good, but they don’t seem to be that effective. Strong fans, on the other hand, can disorient mosquitoes and make them unable to land.

Mosquitoes have a well-documented attraction to human sweat. But ditch your perfume - fragrances are also known to attract mosquitoes and other bugs, so opt for scent-free deodorant and give your skin a break.

If you want to keep mosquitoes at bay safely and still smell delicious, try coconut oil instead. The fatty acids in there have been found to be highly effective repellents against mosquitoes and other blood-sucking insects including biting flies, ticks and bed bugs.

India's COVID death toll 'could be 10 times the official count'