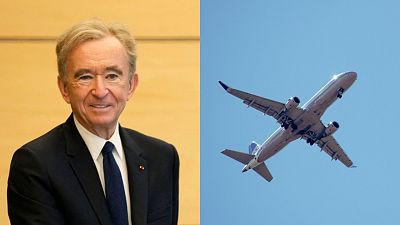 Bernard Arnault has sold his private jet, after months of being tracked by climate activists on twitter   -   Copyright  Left: AFP. Right: Canva   -
By Charlotte Elton  •  Updated: 18/10/2022

The world’s second richest man has sold his private jet after being tracked by Twitter climate activists.

Bernard Arnault - the CEO of luxury goods company LVMH and co-founder of Louis Vuitton - is worth an eye-watering €140 billion.

But he’s not immune to the criticisms of the Twitterverse.

The billionaire’s company has sold its private jet after a social media account started tracing his flights and tallying his carbon emissions.

“Indeed, with all these stories, the group had a plane and we sold it," Arnault told France’s Radio Classique.

"The result now is that no one can see where I go because I rent planes when I use private planes."

How much carbon do billionaire jets emit?

For six months, two twitter accounts - @i_fly_Bernard and @laviondebernard - have been tracing the billionaire’s flights.

Together, they have amassed more than 100,000 followers.

“63 French billionaires emit as much CO2 as 50 per cent of the population,” the I Fly Bernard bio reads.

Arnault is not the only celebrity to have his flight data scrutinised on social media.

Confronted with the vast figure - more than 1000 times greater than the average person’s carbon footprint - a spokesperson for Swift insisted that the plane was regularly loaned out.

Flying is terrible for the planet. One study from Lund University found that avoiding just one transatlantic flight saves eight times more greenhouse gas emissions in a year than recycling.

Private jets are particularly dangerous. Because they generally carry small numbers of passengers, they are up to 14 times more polluting than commercial planes.