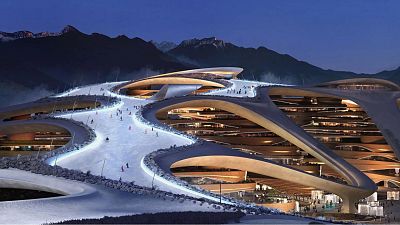 The warning comes days after the desert kingdom won its bid to host the 2029 Asian Winter Games.

Saudi authorities claim that the new Trojena resort in the country’s north west will operate on “sustainable infrastructure” and renewable energy.

But Greenpeace campaigners have questioned the project’s environmental credentials.

"You're changing a natural ecosystem which can have compounding impacts,” says Ahmed El Droubi, regional campaigns manager for Greenpeace.

"I don't even know if we have the capacity to predict and model such impacts, and it is a very dangerous thing to do, to massively alter ecosystems in this manner."

The resort will be located in the Sarawat Mountains, just 50 kilometres inland from the Red Sea. The area is around 10 degrees cooler than the rest of the region, but the snow will still be almost all manmade.

The Gulf Kingdom was the only country to bid for the right to host the 2029 games.

Where will Saudi Arabia’s new ski resort be?

It will be open for skiiers ‘year-round,’ according to Neom chief executive Nadhmi al-Nasr.

"Trojena will have a suitable infrastructure to create the winter atmosphere in the heart of the desert, to make this Winter Games an unprecedented global event," he said.

The mountain town will also contain a massive man-made lake and a ‘vertical village’, a collection of high density

Neom is designed to be completely carbon neutral, running on 100 per cent renewable energy.

However, campaigners have criticised the project’s environmental impact. Ahmed El Droubi points to the lake as one example.

"It will have to be consistently fed with water and therefore will continue to utilise massive amounts of energy on a long-term basis. Even if it's powered through renewables, it's a waste of energy," he said.

"Just because something is powered by renewables doesn't make it sustainable or environmentally friendly... There are many other factors."

Why is Saudi Arabia building a ’green’ city in the desert?

The Neom development is part of the gulf country’s efforts to diversify away from oil. The kingdom is currently the world’s biggest crude oil exporter.

The planned city contains a 160km long ‘horizontal skyscraper’ known as ‘The Line.’ Just 200 metres wide, this futuristic development could supposedly house up to 9 million people.

However, El Droubi warned that the project would largely benefit the super-wealthy.

“Who needs housing in the region? There is an oversupply of real estate for the rich elite.”