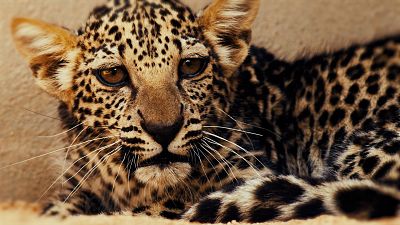 The birth of an Arabian leopard cub in Saudi Arabia is fuelling hope for the survival of one of the world’s most critically endangered animals.

The Royal Commission for AlUla (RCU) has just announced that the female cub was born on April 23 at the Arabian Leopard Breeding Center in Taif, Saudi Arabia.

They could only identify her gender and carry out her first health check in July. The cub is now one of 16 born in their captive-breeding programme which aims to bring the animal back from near extinction.

It is thought that only 200 Arabian leopards remain in the wild after centuries of habitat loss and human conflict. The International Union for Conservation of Nature (IUCN) says the species is “critically endangered”, which means it is at extremely high risk of extinction in the wild. The leopards are thought to remain in only three countries: Saudi Arabia, Oman and Yemen.

Motivation to save the leopard in Arabia is strong. For the region's inhabitants the Arabian leopard – known in Arabic as An Nimr Al 'Arabi' ­– has long represented beauty, tranquillity, physical strength, fearlessness and freedom. The animal has impacted people's lives over centuries, and is found in ancient rock art, stories and even everyday expressions.

To repopulate the region with these leopards, RCU is transforming the vast wildernesses of the AlUla area in north-west Saudi Arabia. 80 per cent will become a nature reserve with habitats specifically designed to allow the Arabian leopard to thrive.

The RCU plans to increase the leopard’s numbers through its captive-breeding programme before re-introducing more of the species into the wild at AlUla.

Watch the video about the little cub above.

How these countries could go extinct due to climate change