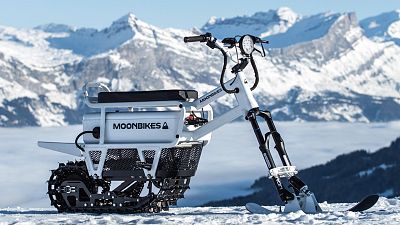 The idea for an electric snow bike first came to Nicolas Muron - CEO of MoonBikes - in 2015, when visiting his grandparents' home in the French Alps.

That Christmas he made a simple observation: transportation options are infinite in the summer months, but when winter comes around, heavily polluting cars and snowmobiles are the only viable option.

Ever a lover of technology, Nicolas took on the challenge of finding a solution.

“I wanted to make a machine that is easy to use, and electric to protect the environment and to enjoy the silence,” he says.

With that in mind, Muron set about creating the world’s first electric snow bike - an ambitious undertaking aimed at protecting the environment he calls home, and having some fun along the way.

"It’s electric and silent, so it doesn’t bother anyone and it protects the environment, it protects mountains.”

Muron’s design is “easy to use”, democratising the snow transportation industry which previously offered few options for a wider demographic.

"88 per cent of snowmobile users are male, so snowmobiles are not for everyone,” says the French engineer.

At just 87 kilograms, the MoonBike provides a speedy alternative over three times lighter than a conventional snowmobile.

But while ergonomic factors like these remain a key selling point for Muron’s design, his main drive lies in bringing sustainability to an industry infamous for its gas-guzzling.

In one hour, a typical snowmobile can emit as much hydrocarbon as a 2008 model automobile emits in 86,000 kilometres of driving.

The MoonBike, meanwhile, can cover up to 64 kilometres with a single 2.5 kilowatt battery. It can climb groomed slopes with a 40 per cent steepness, and boasts top speeds of up to 42 kilometres per hour.

"In the powder snow, it seems like skiing or snowboarding,” says Muron, who insists the design is capable of gliding on the moon.

“Because it’s completely silent, you really feel like you’re sliding, you can really curve lines just like you do when skiing.”

Watch the video above to see the MoonBike in action.