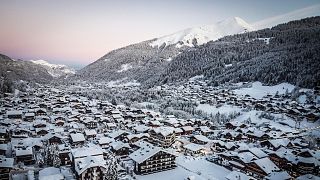 As global temperatures continue to soar, many alpine ski resorts are expected to lose as much as 70 per cent of their snow cover by the year 2099.

This could mark the end of the conventional ski holiday, with natural snow becoming wetter, less frequent and harder to find.

But with Europe’s winter sports industry attracting as many as 210 million skiers each year, many resorts are looking at ways to offset the heavy carbon cost of tourism - and survive the threat of permanent closure.

“We're running a tourism area, and we're encouraging people to come here,” says Sara Burdon from the Morzine Tourist Office, “but we can still have a huge impact on the actions we take.

“Whether it's choosing to get the train over the plane, or opting for more sustainable ways of looking after the ski pistes, we can choose to minimise our impact and help keep the snow here for years to come.”

Can ski resorts be truly green?

Despite alarming predictions about the future of the ski industry - season lengths could be reduced by as much as 50 per cent by the year 2050 alone - many resorts remain optimistic about the possibility of carbon-neutral tourism.

Situated deep within the Chablais mountain range, Morzine is one of France’s most popular ski destinations, offering 120 kilometres of skiable terrain spread across 69 glorious runs.

“Gaining the award was an incredible achievement for us,” says Burdon.

“Well over a year of work went into gathering information, creating a strategy and putting improvements and new projects into place. We still have a lot to do, but we’re very motivated to keep pushing forward.”

Alongside an innovative rewilding project, Morzine’s commitment to a pollution-free town centre was at the heart of their triumph.

“The idea is to create a lovely area where children can play happily, families can sit around and have fewer cars polluting the town.”

Car-free but not care-free

Walking through the centre of the village, it’s easy to see why Morzine would benefit from a reduction in road traffic.

The resort boasts a beautiful array of shopfronts, cafes and restaurants, each brimming with holidaymakers on their way to and from the slopes. But as the ski day gets underway, cars become an unnecessary intrusion in this quaint Alpine village. They clog up the roads, causing queues throughout the resort and producing noise pollution well into the night.

Transportation, it seems, is a key issue for this town - and the same is true for the ski industry in general.

Around 75 per cent of the carbon footprint of a ski holiday from a British person to a ski resort comes from their transportation.

“Around 75 per cent of the carbon footprint of a ski holiday from a British person to a ski resort comes from their transportation,” says Al Judge, the founder of Morzine-based chalet experts, AliKats.

“If people can come by train rather than flying or driving, it would hugely reduce the carbon footprint of tourism in the Alps.”

This sentiment is echoed throughout the resort, where many local businesses are clubbing together to reward travellers who opt for the train over the plane.

Montagne Verte - an environmental charity based in the town - has created the ‘AlpinExpress Pass’, a discount card providing train passengers with cut-price accommodation, transfers and ski hire throughout the region.

“You just have to come along and prove to them that you've arrived by train, and they'll give you a specific QR code to get those reductions.”

Is skiing possible in a warming world?

For many in Morzine, climate change is no longer a distant phenomenon. It’s an everyday reality.

As snow cover declines and winter seasons become shorter, the resort’s dependency upon skiing is becoming harder and harder to sustain. Instead, locals are looking at ways to encourage four-season tourism throughout the town - appealing to both skiers and non-skiers alike.

“It’s not just about the winters, but the summers too,” says Burdon.

“Morzine is a great year-round resort. We've got a really buzzing, busy summer season with tons of activities and loads for tourists to do.”

Later this year, local eagle expert Jacques-Olivier Travers will reintroduce six white-tailed eagles at nearby Lake Geneva - a region that has been without the birds for 130 years.

“It was the last place they lived in France,” says Travers, “and in the next eight years we will reintroduce a further 80.”

This is the beginning of a shift which could see conventional ski resorts become a thing of the past.

Locals hope initiatives like this one will encourage tourism throughout the warmer months, diminishing their dependency upon snow. Alongside mountain bike trips and walking holidays, this is the beginning of a shift which could see conventional ski resorts become a thing of the past.

“Our mountain areas are affected more than any others by rising temperatures,” says Burdon. “We’re seeing a huge difference now in the snowfall that we're getting and the changes that’s bringing to our natural environment.

“That’s why it’s really important for us to make these changes now, before it’s too late.”