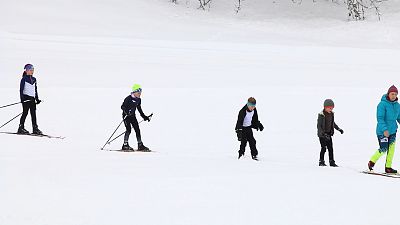 In the edition of Climate Now we look at how mountain resorts are working with scientists to adapt to the effects of climate change. First though, we start with the latest data for January from the Copernicus Climate Change Service.

Global temperatures above average in January

Globally, it was the sixth warmest January on record, with temperatures more than 0.2 degrees Celsius above the new 1991-2020 average.

The map of temperature anomalies shows how it was a lot colder in some places and warmer in others.

In Norway, Sweden and Russia they had their chilliest January since 2010.

In the village of Leirflaten in Norway temperatures were 10 degrees Celsius below average last month.

Then in Athens, the first ten days of the year were the warmest they've ever had compared to their 160-year temperature record.

Moving on to precipitation anomaly, we can see that it was much wetter than average in Italy, and along the Adriatic coast.

Then in Spain, they had significantly more snow and rain than average in central and eastern parts of the country.

This was done to bring it in line with recommendations from the World Meteorological Organisation, and to ensure that the reference period reflects our current climate.

Copernicus will also continue to report long term trends of how climate has evolved over the last century, and of course, the historic highs and lows remain the same.

An exceptional winter for ski stations

Moving on to our report, and the tricky choices ahead for ski stations as they seek to adapt to a warming planet. This winter has been exceptional for ski stations across Europe, as they have had plenty of snow, yet hardly any tourists because of the coronavirus restrictions.

Looking further ahead, their biggest concern is climate change. So now, they're working with scientists to ensure they have the best information to make the smartest decisions in a world where snow will become ever-more rare.

We went to meet them, starting at the Col de Rousset, at an altitude of 1,300 in the Vercors mountains of the Drôme department of France. It's here that Italian climate scientist Carlo Carmagnola from the ClimSnow Project has arranged to meet ski station managers to begin planning for the future.

Despite the fact that we're surrounded by deep snow this year, he says resorts should not be lulled into a false sense of security.

"We're talking about climate change and a lack of snow, and yet there's a lot of it around now, but you really must not confuse trends with variability,” he says. “You can have a trend of rising temperatures while still having variability within a season and even more so between seasons, with highs and lows."

The ski stations at these lower altitudes are already aware that they need to change, as the number of years with a viable number of snow days per year on average is lower. So, they are diversifying their activities.

"We know that the sectors at 1,000 metres are finished,” explains Operations Manager Marc Oboussier. "You have to be honest, we can't fight on all fronts: compacting the snow, importing snow, that's finished for us. But this is also a summer destination: there are tarmacked tracks, you can do roller skiing on them, so there's something to compensate. This site is really sought-after in summer."

A scientific perspective on investment decisions

The tricky thing is to decide what to invest in, and where. That's where the new ClimSnow application can offer a scientific perspective.

Within each range we can take into account the exact orientation and altitude of the slope, with eight different orientations, different levels of steepness, and different altitudes by bands of 300 metres

ClimSnow is already working with over 70 ski stations in France, to offer detailed climate projections for the next 30 years.

"Each mountain range, the Pyrenees and the Alps is treated separately,” explains Carlo Carmagnola. “And within each range we can take into account the exact orientation and altitude of the slope, with eight different orientations, different levels of steepness, and different altitudes by bands of 300 metres."

All year round activities

ClimSnow can model different climate scenarios with and without artificial snow, models which are vital to inform strategic investments that take decades to pay off.

Snow is a bonus. But our ski stations have to be able to function even when there's no snow.

"Do we go towards a consolidation of our activities, that's to say stabilize and secure our snow cover? Or do we just let things go as they are and go off in another direction? That is the question, and right now it's the climate scientists who can answer it."

"The solution is to adapt our activities. The adaptation of snow activities, on the one hand, but also the diversification of activities over the rest of the season. We are in a mindset where we say that snow is a bonus, but our stations must be able to operate, even if there is no snow. That's the idea."

"The question of equipping certain sectors of the resort with artificial snow is now on the table. This type of investment must be reflected in the long term, over a period of 20 or 30 years, and this is where the contribution of climatologists is precious."

"It will be extremely decisive for us in terms of investment, knowing that these investments there,  mean making a living for a whole set of socio-professional actors. I am talking about ski equipment rental companies, ski instructors, accommodation providers and also restaurant owners who make a living from this resort activity," concludes Fermond.

Luckily, some mountain activities are proving resistant to the effects of climate change, like dog sledding. When there's no snow, the sleighs are fitted with wheels, and the dogs are just as keen to have fun, whatever the weather.

"We can adapt all our activities, whether it's a sleigh-ride or sleigh-driving,” says Maxime Allard, Dog Sled master at Max’Cimes. “We can offer activities all year long with wheels, with skates, or on foot."