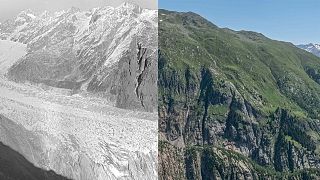 Shocking new images reveal the extent to which Swiss glaciers have shrunk since the 1930s   -   Copyright  ETH Zurich and Swiss Federal Institute for Forest, Snow and Landscape Research WSL
By Charlotte Elton  •  Updated: 25/08/2022

Switzerland’s 1,400 glaciers have shrunk by more than half in the last 85 years, a new study has found - and the rate at which they are melting is only accelerating.

The alpine country is famous for its majestic icy landscape.

But according to researchers from ETH Zurich and the Swiss Federal Institute of Forest, Snow and Landscape Research, Swiss glaciers have lost half their total volume since the early 1930s.

The new analysis reveals the “big picture” of a warming mountain landscape, explains Daniel Farinotti, Professor of Glaciology at ETH Zurich and WSL.

“Glacier retreat is accelerating,” he says.

“Closely observing this phenomenon and quantifying its historical dimensions is important because it allows us to infer the glaciers’ responses to a changing climate.”

Before and after pictures reveal how much Swiss glaciers have melted

Shocking before and after images reveal the extent of the melt.

Where ice once coated the ground, the rocky slope is grey and bare. Huge ice floes have diminished into small blue lakes.

The images are shocking visual proof of a warming climate. They are also the data researchers used to calculate the glacial loss.

By painstakingly mapping thousands of photos, scientists reconstructed the topography of the glaciers over time.

By doing so, they could calculate the changes in volume.

“While there may have been growth over short-​term periods, it’s important to keep the big picture in mind,” Farinotti says.

“Our comparison between the years 1931 and 2016 clearly shows that there was significant glacial retreat during this period.”

By area, Switzerland’s glaciers amount to about half of all the total glaciers in the European Alps. According to the head of the World Metreological Association, they will shrink to 5 per cent of their current size by the end of the century.

Wherever there are glaciers, this phenomenon is replicated. A 2019 study suggested that the world loses 390 billion tons of ice and snow per year.

And, according to Italian environmental group, Legambiente, 200 Alpine glaciers have disappeared since the end of the 19th century.

Why is glacial melting bad?

The ice floes form over millennia, as snow accumulated in cold places compacts and recrystallises as ice.