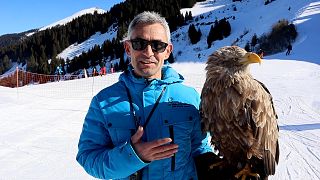 Over 80 white-tailed eagles will be reintroduced to the French Alps over the next eight years   -  Copyright  Getty Images
By Ben Anthony Horton  •  Updated: 07/03/2022

High above the French ski resort of Morzine lies a restaurant with a hidden secret.

Much like the numerous chalets that line the slopes, Les Aigles du Léman is packed with winter-worn skiers enjoying some lunch after a long morning on the pistes.

But beyond the building's Alpine exterior, its rustic charm gives way to a fully-stocked aviary, boasting a Himalayan vulture, an imperial eagle and a dramatic assortment of endangered owls.

Every lunchtime, these birds put on a spectacular display high above the resort’s snow-capped peaks, drawing in crowds of skiers from the surrounding slopes - and raising awareness of conservation along the way.

“I think I was 11 years old when I got my first bird of prey,” smiles Jacques-Olivier Travers, the conservationist behind the project.

“I fell in love immediately, and since that time in my life, I was focused on birds: how to understand them, to breed them, and one day, to reintroduce them to the Alps.”

From pulling pints to picking up predators

Jacques-Olivier Travers is no stranger to the spectacular.

The eagle expert has flown birds around the world - from the top of the Burj Khalifa in Dubai, to the roof of St Paul’s in Central London.

Videos of his escapades have amassed thousands of views online - and his current project is no less extraordinary.

I started to ski with him to teach him to fly in the mountains.

While he is usually found pulling pints behind the restaurant’s bar, the rest of the day he is out on the slopes - often with an eagle flying high above his head.

“I’m the man who skis with eagles,” smiles Travers, as he takes a lift to the top of one of Morzine’s highest pistes.

On his left arm is Fletcher - a white-tailed eagle and one of Europe's largest birds of prey.

“I started to ski with him to teach him to fly in the mountains,” says the raptor expert, who has looked after Fletcher for the past eight years.

“Now I do it to raise awareness of the conservation of eagles. When they see Fletcher flying above their heads, they come to me and ask me so many questions about him: why he's here, what we do with him?

“It was important for us to raise awareness about conservation, and he was the best ambassador we could have because everybody knows him.”

The white-tailed eagle rides a series of thermal currents, before swooping back to his master’s arm below.

For a short while, the pair move in unison, gliding past groups of bewildered skiers exchanging quizzical glances. This is the first time an eagle has been seen in this part of the Alps for a very long time.

But before they have time to take a photograph, Fletcher is off again - this time gliding across the canopies of nearby pine trees in search of prey.

“When we can do something to help nature, it's very important to do it,” says Travers, sliding to a halt at the bottom of the slope.

“This bird was living in France for 1 million years, and in one century we killed all of them. Now I think it is my duty to let them come back into the wild.”

This slope-side spectacle might seem like a bit of fun in one of France’s most popular ski destinations. With 12 interlinked resorts at your fingertips, the Portes du Soleil ski domain has something for everyone - even those who would prefer to stick to the après-ski activities.

Restaurants, bars and shops remain the cornerstone of the resort’s burgeoning ski-free activity list. But as the popularity of the winter park grows, the region hopes to include nature tourism in its roster of piste-side excursions.

“It’s just fun entertainment for the tourists in the middle of their ski day,” says Sara Burdon, from the Morzine Tourist Office.

“Hopefully from that, it’s creating awareness of the natural environment that they’re skiing through, and of the creatures that were here well before we were and that deserve to have their place in the mountains as well.”

This year, we expect to reintroduce six white-tailed eagles near Lake Geneva.

This is the same sentiment that drives Jacques-Olivier Travers in his quest to rewild eagles in the French Alps - a region that has been without the birds for 130 years.

“This year, we expect to reintroduce six white-tailed eagles near Lake Geneva,” says the conservationist.

“It was the last place they lived in France, and in the next eight years we will reintroduce a further 80.”

The mission is not without its critics though. Rewilding projects like this one are invariably thwart with difficulty - not least because they involve introducing a predator to a popular farming region.

“The key issue is to understand the reason for the species' extirpation in the first place,” says Dr Ruth Tingay, a raptor conservationist in the UK.

“For example, if an eagle species has been extirpated from a region or country by persecution because the locals don't like them, then unless you've been able to change those people's attitudes, the eagles reintroduced into that area are just going to be killed.”

For Travers, this issue is at the forefront of his work - an attempt to endear locals and tourists to a species long believed a threat to the region’s livestock.

“When they see the eagle flying with me, people realise it's not dangerous,” says Travers.

“Everybody knows Fletcher and everybody knows about these birds. It's a nice story, and I know how important it is to tell a story.”

It's the passion of my life.

For now, the raptor conservationist plans to release six birds between 15 June and 15 July 2022. If the project is a success, many more will be rewilded in the coming years - a prospect that makes Travers smile with joy.

“It's the passion of my life,” he says on his way back behind the bar.

“I want to touch a new generation with these wonderful birds.”

Watch the video above to see the man who skis with eagles.