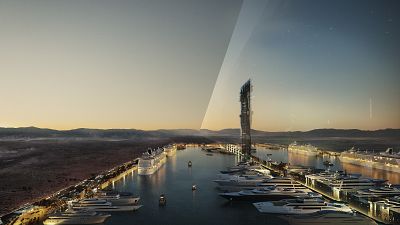 Two skyscrapers taller than the Eiffel Tower stretch 170 kilometres across the Red Sea coast, with the blistering sun glaring off their mirrored exteriors.

Inside the monolithic structure, nine million people go about their lives within a year-round micro-climate in the desert, with any service they need a mere five-minute walk away.

While it sounds like the setting of a (potentially dystopian) sci-fi novel, this is the idea unveiled by the Saudi Arabian crown prince Mohammed bin Salman Al Saud for the major population hub of his Neom desert super-city project.

First touted in 2017, the desert mega city would supposedly house nine million people by 2045, as Saudi Arabia attempts to grow its population and become a global economic powerhouse.

The project has consistently raised eyebrows because of its plans for flying taxis and robot butlers, and doubts have been raised by architects and economists about the feasibility of building such an ambitious project

And more eyebrows have been raised since Monday’s designs for the twin-skyscraper city, dubbed The Line.

Unveiling the designs for The Line, the prince said the car-less city would become the planet's most liveable city "by far".

Aside from the gargantuan feat of engineering required to build two 500-metre tall skyscrapers that run the length of 170-kilometres across the Red Sea coast, the entire city will supposedly be 100 per cent run on renewables.

Inhabitants will have every service they need within a five-minute walk from their home. The city will address “the crises of livability and the environment” the prince added.

At only 200 metres wide, The Line will stack houses, schools and parks on top of each other, according to a so-called “zero gravity urbanism” model.

It was first billed as Saudi Arabia’s answer to Silicon Valley in the United States, a hub for technology and futuristic innovation.

But with the plans for The Line outlined with the release of highly-produced marketing materials, Neom is being billed as much more than a technology hub.

Along with The Line, the Neom project has also outlined its plans for the port city of Oxagon (which it claims will be the largest floating structure in the world, with a population of 90,000 by 2030) and Trojena (a mountain resort with activities including skiing).

Analysts have noted that with the plans for Neom changing course over the years, there are doubts about whether a project like The Line will ever become the reality advertised.

"The concept has evolved so much since it was first conceived that it is sometimes difficult to determine its direction," said Robert Mogielnicki of the Arab Gulf States Institute in Washington.

And its environmental credentials have also been called into question.

Torbjorn Soltvedt of consultancy Verisk Maplecroft told AFP that while Neom is planning to house the world’s largest green hydrogen plant, and benefit from solar and wind power, “the feasibility of NEOM as a whole is unclear given the unprecedented scale and cost of the project”.

Neom is part of a wider national strategy, which aims to build a population of 100 million in the crude-oil rich kingdom by 2040.

The crown prince said this would be made up of "nearly 30 million Saudis and 70 million or more foreigners," compared to the current population of 34 million currently.

"This is the main point of building NEOM: to increase the capacity of Saudi Arabia…and since we are doing it from scratch, why copy the normal cities?” he said.

Human rights groups have highlighted the alleged displacement and abuse of members of the al-Huwaitat tribe, who lived in the space being occupied by Neom.

How much will this all cost?

Announcing the designs and updates plans on Monday (July 25), bin Salman said his project will be partly financed through private sector investment, with an initial public offering (IPO) expected to take place in 2024.

The project is supposedly going to cost around $500 billion (€492 billion), with the first phase expected to cost $319 billion (€314 billion). Half of that will come from the Kingdom’s sovereign wealth fund, he said.

Financing remains a potential challenge, although the current environment of soaring oil prices is more favourable for Saudi Arabia than during the earlier stages of the COVID-19 pandemic.

Moreover, "financing is only part of the equation," Robert Mogielnicki points out.

"Demand is harder to buy, especially when you're asking people to participate in an experiment about living and working in the future".