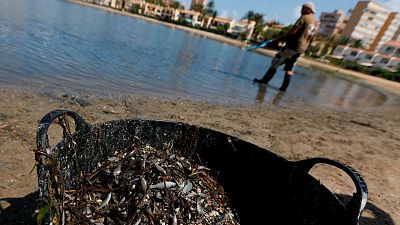 The law codifies the lagoon's right "to exist as an ecosystem and to evolve naturally" and recognises its right to protection, conservation and restoration.   -   Copyright  Edu Botella/Europa Press via AP
By Angela Symons  with AP  •  Updated: 27/09/2022 - 15:23

Spain has granted personhood status to Europe's largest salt-water lagoon in a first for the continent.

Mar Menor lagoon has suffered massive die-offs of marine life due to degradation caused by coastal development and local farming.

The new law came into force on Wednesday after a citizen-led push to provide better protection for the threatened ecosystem.

More than 600,000 citizens backed the initiative, which was then voted in by the Senate in Madrid.

What does it mean to grant personhood status to Mar Menor lagoon?

Now that Mar Menor lagoon has personhood status, it will be granted special protections.

A total of 1,600 square kilometres of the lagoon and the nearby Mediterranean coastline will now be legally represented by a group of caretakers. This is made up of local officials, citizens and scientists who work in the area.

The grassroots group that pushed the measure hopes this will improve the ability to defend the lagoon from further degradation.

The law codifies the lagoon's right "to exist as an ecosystem and to evolve naturally" and recognises its right to protection, conservation and restoration.

The World Wildlife Fund calls the Mar Menor Europe's largest salt-water lagoon. It is home to several species of fish, seahorses and the endangered European eel.

The lagoon, which covers 135 sq km, is separated from the open sea by a thin 22km-strip of land that is a popular vacation spot dotted with hotels.

For years, ecologists and citizens have denounced the periodic die-offs of marine life in the lagoon due to the runoff of fertilisers from nearby farms.

In 2019, over 50,000 people marched in the nearby city of Cartagena to denounce the degradation of the lagoon on Spain's southeastern coast.

This month, Spain's government approved €20 million in aid to improve water treatment in towns near the Mar Menor as part of a recovery plan for the lagoon.

"So that natural disasters like those that have occurred, so that the episodes of mortality of fauna of the Mar Menor don't return, let's give this ecosystem its own rights," Senator María Moreno said before the vote.