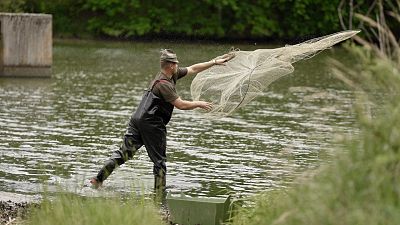 Traditional ways of aquaculture — like this fish pond in Czechia — can be helping local ecosystems   -   Copyright  Euronews
By Denis Loctier  •  Updated: 24/08/2022

Every morning, small fishing boats leave the port of Bueu in Spanish Galicia to look for edible razor clams a few kilometres from the mainland near Ons, one of the Galician islands in the Atlantic Ocean. This is a specially protected area. Only the most careful fishing methods are allowed.

Thirty-one-year old Jesús Pilarte Vilar has been catching the clams for the past five years. Like other fishers in the area, he doesn’t use any industrial tools that could damage the seabed. Instead, he dives to find and carefully pull molluscs from the sand one by one.

It’s a much better, more sustainable method, ecologically speaking, because it doesn't disturb the seafloor. You don't damage other organisms. You use your eyes to find the razor clams and pick them by hand. It's more selective. You only take the larger ones, that have reached the commercial size.

Preserving this traditional method allowed the fishery to obtain a Marine Stewardship Council certification recognising its sustainability. The work day isn’t very long, as each clammer is only allowed to collect 15 kilograms of molluscs.

Controls are mandatory: the catches are verified by their colleagues and are often checked by the authorities. So, what makes these restrictions necessary?

Preserving nature on the islands

A few years ago, the Galicia islands — both the land and adjacent sections of sea — were declared a national park. The unique ecosystem of these archipelagos requires constant protection. For the park administration, that meant curbing the flow of tourists to manageable levels, and reaching an understanding with local fishers.

‘If the fishers can see that the protection measures improve the livelihood for themselves and their families, then it’s a win for us all. Then they can continue fishing for many more years, while the bird and fish populations continue to live here. And the tourists, who also make part of our ecosystem, can keep enjoying this protected area,’ said José Antonio Fernández Bouzas, director and curator of the Atlantic Islands of Galicia Maritime-Terrestrial National Park.

The islands, with their natural beauty and white sandy beaches, attract thousands of tourists every day. This was seen as an opportunity for fishers to earn more, while catching less. A local group started training artisanal fishermen to also work as tourist guides.

‘From the very start of this training project, we ‘ve been teaching the fishers to pass the environmental message to tourists. That seemed essential in this natural park setting,’ said Laura Nieto, Manager of the Ría de Pontevedra Fisheries Local Action Group.

Hundreds of local fishers and shellfishers have taken the training course in ‘pescatourism’, thanks to the support of the European Maritime, Fisheries, and Aquaculture Fund.

Javier Costa was one of the first to participate in the project. He works together with his wife and son on a small longliner vessel which is now equipped to take up to four passengers on board.

Pescatourists can see how fishers work, learn more about sea life, and see some unique views of the Atlantic islands. Javier said that the five dozen tourists they had taken out with them over the past year could see how artisanal fishing can safely coexist with fragile ecosystems.

I took part in this project so that everyone can see that we care for the parks and their resources — we’ve been fishing here for ages and ages.

And it’s not just Europe’s coastal regions that can truly benefit from preserving their fish traditions. The landlocked Czech Republic has countless ponds where fish have been bred since the Middle Ages. It is the local aquafarmers that take care of these essential water bodies.

‘The ponds are really important for the environment and for the landscape, because a pond creates a microclimate around it. It produces a lot of steam, which is also great for the landscape around us and also for other farmers,' said Oldřich Pecha, a fish farmer from ESOX Hatchery.

Local scientists are helping breeders to keep this fish-raising method competitive, in order to preserve the ponds that are so important for local ecosystems.

Unlike more industrial methods, this so-called ‘extensive aquaculture’ does not amass large numbers of fish in small spaces, so water pollution remains low. The CENAKVA research centre runs a number of projects supporting this traditional industry.

At the centre, fish geneticists are breeding species that are most suitable for extensive aquaculture.

‘We can put fewer fish in the pond and achieve the same production as if the ponds were more densely populated and supplemented with more feed,’ said David Gela, Head of the Genetic Fisheries Center, Faculty of Fisheries and Protection of Waters, University of South Bohemia in České Budějovice.

Czech researchers are looking to combine fish breeding with crop cultivation, in a circular economy approach. Some aquaculture methods can pollute water with feed residues and fish waste, but this can be turned into resource.

Transforming the negative into positive

At an experimental hydroponic facility, water from fish tanks is recycled as a source of nutrients for growing salad, tomatoes, and other greenhouse plants.

‘The sludge from the fish comes out and we recycle it here. We don't let it go into the environment and result in a negative footprint. In a very small area, we're growing more food with the least amount of water and nutrients, and less emissions. So that is aquaponics — it's an integrated system,’ said Koushik Roy, a circular and sustainable aquaculture system biologist at CENAKVA and Faculty of Fisheries and Protection of Waters, University of South Bohemia in České Budějovice.

Win-win situation for people and the environment

Public health can be another winner. A preschool in Czech Republic has joined a project that introduces children to fish sausages, meatballs, and other dishes.

‘We know that eating habits are developed early in childhood. We're focusing on children because when they learn to eat and like fish at this age, they will do it all their life,’ said Jan Mráz.

Fish consumption in the Czech Republic is among the lowest in Europe. Researchers want to find out which tastes, shapes, and colours of fish food children would be most happy to eat.

‘In the four years that we’ve been participating in this project, most of the children got used to eating fish products. Now they understand that fish can have various tastes, and that it is healthy, said Magdalena Marešová, Director at the University Kindergarden Kvítek.

So, ultimately, traditional fishery and aquaculture can play a positive role in the health of both children and nature.