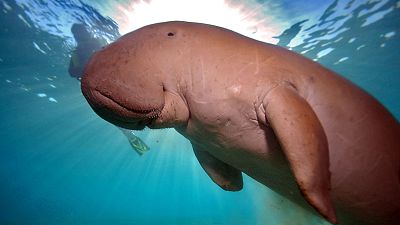 The serene lifestyle of Asia's dugong's is being threatened by seagrass pollution and fishing   -   Copyright  Getty via Canva
By Shannon McDonagh  •  Updated: 25/08/2022

One of the sea’s most peaceful creatures - said to have inspired mermaid tales - has been declared essentially extinct in China.

Nicknamed “sea cows”, dugongs are herbivorous marine mammals most often found across Pacific-Asian waters. While they still exist elsewhere, only three people surveyed from Chinese coastal communities have seen the animal in the last five years.

It has led researchers to conclude that dugongs are now “functionally extinct” in China; the first time a large vertebrate has disappeared from the country’s marine waters

Described by the WWF as “plump” in appearance, they get around using their striking dolphin-like tails, living off seagrass grown from shallow ocean beds.

Their tranquil existence hasn’t stopped them from falling victim to threat of extinction - in fact it may have put them in harm’s way.

The International Union for Conservation of Nature’s (IUCN) Red List of Threatened Species classifies them as “vulnerable”. This is said to be species-variable as studies show some populations of the mammal may have escalated to “critically endangered”.

To try and get a better sense of how dugongs were faring in China, researchers conducted a large-scale interview survey across four Chinese provinces.

Only 5 per cent of 788 respondents reported past dugong sightings, with an average last-sighting date of 23 years earlier. No records are documented after 2008.

It’s possible that China has few surviving dugongs that just haven’t been spotted, the researchers acknowledge, so they can’t confirm complete regional extinction. But the chances are that dugongs are long gone from Chinese waters.

“This rapid documented population collapse also serves as a sobering reminder that extinctions can occur before effective conservation actions are developed,” they write in the Royal Society Open Science journal.

What is being done to protect dugongs?

Dugong’s relationship with the country is a special one - they were first known to populate the Arabian Gulf over 7,500 years ago. It’s uncommon for the creatures to travel in large groups, but numbers are so strong that the largest sighting of over 800 of them was found in Qatar in 2020.

The country’s environmental ministry has spearheaded several initiatives to raise awareness of the role the animal plays in the nation’s sea life, with funding for research that will inform conservationists on how to better protect them.