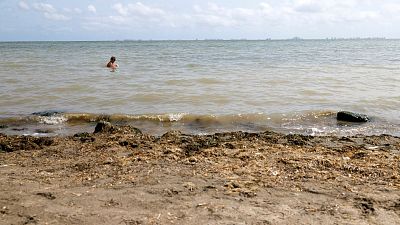 Authorities in Spain are investigating whether a “mega-party” held on one of Europe’s most endangered saltwater lagoons broke environmental laws.

Around 100 boats gathered in a specially protected area off Isla del Ciervo in the Mar Menor, south-eastern Murcia between 20 and 21 August. The vessels reportedly stayed there for hours as passengers listened to a concert.

Spain’s Ministry for the Ecological Transition and the Demographic Challenge (MITECO) said that it would be looking into the party and “penalties could be imposed if it is determined that there were breaches of the law.”

The wildlife branch of the Guarda Civil has been asked to open an investigation into the matter.

The ecological ministry also said that the regional government of Murcia was responsible for protecting the flora and fauna of the Mar Menor.

“The lack of prior control of the recreational activities taking place in the Mar Menor by the regional government encourages excesses that alter the delicate balance of the ecosystem of this protected area,” MITECO wrote in a statement.

It added that parties of this scale should have been cleared with the coastal and maritime authorities.

Murcia’s government has fought back against claims it is responsible for the gathering. A source at the regional environmental ministry told UK newspaper the Guardian that the ministry’s “baseless accusations” were an attempt to hold the regional administration responsible for a drinking party.

After news of the party emerged, Antonio Luengo, Murcia’s environment minister, said that he wasn’t “against any kind of fun gathering of boats because it seems to me to be totally reasonable and right, whether it’s in the Mar Menor or anywhere else.”

He didn’t see a reason parties like this shouldn’t take place as long as people behave responsibly.

Why is the Mar Menor so important and what is being done to protect it?

The Mar Menor is a coastal seawater lagoon separated from the Mediterranean Sea by La Manga - a 22km-long sandbar. Isla del Ciervo is one of five islets located within the lagoon, all of which are considered protected landscapes.

The area is designated as a national park by the regional government and is also part of a Specially Protected Area of Mediterranean Importance (SPAMI).

SPAMI are sites that are important for conserving biological diversity in the Mediterranean, contain ecosystems specific to the Mediterranean area or are habitats of endangered species. They can also be of special interest at a scientific, aesthetic, cultural or educational level.

But the Mar Menor has been plagued by pollution from fertilisers, bad sewage systems and runoff from mining operations. In 2018, algal blooms killed off 85 per cent of the vegetation growing on its seabed.

A €484 million plan to restore the saltwater lagoon by 2026 has been put in place by MITECO. It includes fixing the sources of pollution, creating a greenbelt to protect its waters and managing the risk of floods.

A special law recognising the Mar Menor as a legal ‘person’ was also approved by the Spanish Congress in July and will now be put before the senate for ratification. It is hoped that this will allow the lagoon to be better protected by the government and local residents.