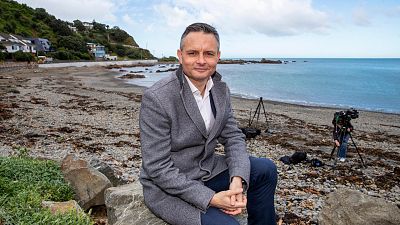 New Zealand's government released its first-ever climate adaptation plan on Wednesday, which includes the possibility of moving some communities to higher ground.

But the six-year plan, which runs nearly 200 pages, comes up short on some important details, including how much the changes will cost and who will pay.

Climate Change Minister James Shaw told reporters that around 70,000 coastal homes in New Zealand are at risk from rising seas, and many more inland homes face the threat of flooding rivers. He admitted the country has been slow to adapt to climate change, which will end up costing more money over time.

"I am frustrated that for the last three decades, successive governments have not paid any attention in any real form to the challenges that we face from the effects of climate change," Shaw says. "We had to start somewhere."

"In some highly exposed areas, the risk from natural hazard and climate impacts may become intolerable," the report says. "Inundation of buildings and infrastructure will start to occur, leading to direct damage and loss of some facilities like roads or other lifeline services, and public open space."

The report says that a "managed retreat" from such areas will often be considered a last resort, to be used in conjunction with other adaptations such as installing seawalls and raising houses on stilts.

Shaw says the costs for adaptation will be borne by a combination of homeowners, insurers, banks, local councils and central government. He adds that the government was taking hardship into account, and will target help to those least able to pay for changes themselves.

Luke Harrington, a senior lecturer in climate change at the University of Waikato, states, "This National Adaptation Plan is a great first step towards addressing some of these challenges, though paucity remains in some of the details."

He sees the report as a timely reminder that New Zealand needs to contend not only with rising seas, but also with other climate impacts such as more severe droughts and extreme rainfall.

The adaptation plan comes two months after the government released a plan to reduce greenhouse gas emissions, which includes a trial program to help lower-income people scrap their old gas guzzlers and replace them with cleaner hybrid or electric cars.

The National Institute of Water and Atmospheric Research said that the first six months of 2022 were the second-hottest ever recorded in New Zealand, with temperatures averaging 15C, around 1.2C above normal.