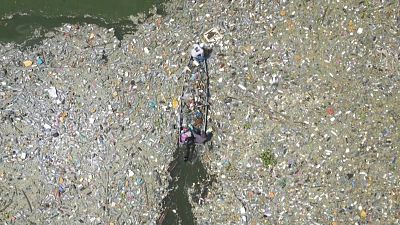 Swept in by the current of its tributaries, Lake Suchitlan in El Salvador is covered in a thick blanket of multicoloured plastic waste.

The same thing has happened on the once-paradisiacal Caribbean beaches of Honduras.

Not only is it an environmental disaster, it’s having a huge impact on the locals who rely on the water for income.

Soda bottles, medicine containers, old sandals and all kinds of plastic materials float in El Salvador’s largest body of freshwater. It serves as a reservoir for a hydroelectric power plant and is considered a wetland of international importance by UNESCO.

As the rubbish has built up on the surface, locals say it has driven the fish down into the depths of the reservoir. With no fish to be caught, many families have lost their only source of income.

"For more than two months we have not been able to fish," says Luis Peñate, a 25-year-old fisherman.

With some 2,500 inhabitants, Potonico, around 100km north of the country’s capital San Salvador, is the most affected of the 15 towns by the lake.

The state Executive Hydroelectric Commission of the Lempa River, which manages the Suchitlan reservoir, employs dozens of workers to clean the lake by hand.

Some locals have also volunteered to help. Nevertheless, it’s still likely to take three to four months to clear up.

It is a "pollution never seen before," says Jacinto Tobar, mayor of the town of Potonico. "The fauna, the flora are suffering a lot" and tourist numbers are dwindling.

The Salvadoran Minister of the Environment, Fernando López, estimated that 3,810 tonnes of waste are generated daily in the country. Of that, around 1,089 tonnes ends up in the country’s rivers, beaches and streets.

One of the places most affected by plastic pollution on the Caribbean coast of Central America are the beaches of the Omoa region in Honduras.

Tonnes of waste arrive in this area via the Motagua River flowing from Guatemala. The problem is so enormous that it has created ‘garbage islands’ that float in the Honduran Caribbean, according to repeated complaints by local authorities and activists.

The issue has even generated tensions between the two countries.

Dutch NGO The Ocean Cleanup warns that some 18,143 tonnes of plastic waste pass through the Las Vacas River, a tributary of the Motagua, every year, most of which comes from the Guatemalan capital's landfill.

"We have to attack where the main flow of all this waste comes from," says Eduardo Arguera, 29, an architecture student at the University of El Salvador who has promoted public clean-up campaigns.

To contain plastic waste and prevent it from reaching lakes and the sea, he proposes the placement of fences at strategic points.

The president of the Centre for Appropriate Technology (CESTA) of El Salvador, Ricardo Navarro, believes that the cleaning up of plastic waste should be "a priority."

According to him only 30 per cent of it floats, which means the rest of it sinks deep into the water.

A report by the United Nations Environment Program (UNEP) states that 11 million tonnes of plastic enter the oceans each year. It also warns that this number could triple in the next 20 years.

Watch the video above to learn more about plastic pollution in Central America.