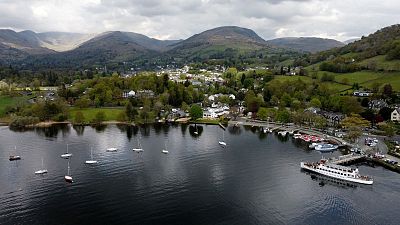 Lake Windermere is one of the crowning glories of the Lake District, the UK’s largest national park and the most visited, drawing more than 16 million visitors a year.

This majestic area of northern England has been protected for more than 70 years and a UNESCO World Heritage Site since 2017.

But the fjord-like body of water is in deep trouble, says local campaigner Matt Staniek. Lake Windermere is heading towards “ecological collapse” because of a deluge of blue-green algae.

In recent years, Windermere’s once-clear waters have become a breeding ground for blooms of the cyanobacteria. They are in full display this summer, as photos show and river users have described.

“We were there [on 14 August] on paddle boards at the top end Ambleside,” one woman tweeted on Monday. “It was like a soup in parts. Didn’t go or fall in the water thank goodness but loads of people were swimming.”

Is Lake Windermere safe to swim in?

The Lake District National Park Authority advises on its website that not all algal blooms are toxic but some can be harmful to humans and lethal to animals.

It says, “It's impossible to tell if the algae is the dangerous kind just by looking at it, so it's best not to enter the water if you suspect there is algae.”

Despite the lake’s deteriorating health, there are still six public bathing sites around Windermere.

Staniek says the number of algal blooms being seen at Windermere is “unprecedented”.

Speaking to Euronews Travel in May, he says “They're bigger than we've ever seen before. The average annual surface temperature of the lake has increased over the last 70 years by 1.7 degrees, and we're now seeing these blue green algal blooms throughout the year."

Why are algal blooms bad for lakes?

Staniek, who trained in zoology, says he’s also recorded a lower diversity of bird species around the lake and a noticeable absence in the lake’s keystone species, such as white clawed crayfish.

“Invertebrate and fish numbers are plummeting, with salmon and trout in decline and the Arctic Char (a related cold-water fish) are now believed to be extinct in the south basin of Windermere,” he says.

What is being done to save Lake Windermere?

Records on the water quality of Lake Windermere have been kept for decades, and Staniek says the problems aren’t new, though they appear to be getting worse.

“Over the past 20 years, it's something that has been spoken about, but not enough has been done by the organisations that are in charge to actually protect the lake,” Staniek tells Euronews.

It is this inertia from the local authorities that has spurred the 26-year-old conservationist into action. This March he founded the Windermere Lake Recovery Community Interest Company (CIC) to spread awareness of the problem and campaign for change.

"The number one thing that is killing Windermere is phosphorus pollution"

At the moment Staniek is self-funding the campaign, but he hopes to make the CIC his full-time job. And he says the local community is behind him.

A crowdfunder has been set up to help fund the Windermere Lake Recovery CIC’s first project, which will create a new, flowing river ecosystem on a National Trust farm in the Langdale Valley. The ecosystem is intended to soak up pollution from farmland before it enters the lake.

How is pollution affecting the Lakes?

Staniek has also launched a Change.org petition to put an end to water pollution in the Lake District.

“The number one thing that is killing Windermere is phosphorus pollution,” he says.

Staniek says the data shows there’s a direct correlation between Lake Windermere’s water quality and the sewage that is being pumped into it. “Sewage adds phosphorus into the water, which acts as a fertiliser for algae,” he explains.

This pollutant is coming from a number of sources, including storm overflow systems and household products, which contain phosphates.

But Staniek says the worst culprits are agricultural run-off and unregulated private septic tanks, which are each responsible for around 30 per cent of the phosphorus pollution entering the lake.

There are estimated to be around 1,900 private septic tanks around Windermere, according to data collected from United Utilities by the Lake District Foundation.

Sewage distribution in England is regulated by the Environment Agency, a government department.

The Lake District National Park Authority says, “We are aware of recent concerns regarding water quality in Windermere. There are a number of factors to address here, and we’re continuing to work with partners, including the Environment Agency and United Utilities.”

How can tourists minimise their impact on Lake Windermere?

Visitors to the Lake District can help support the campaign by ensuring the products they bring with them on holiday - washing up liquids, detergents, washing powders - are eco-friendly.

“One of the problems that we're seeing is that some of the phosphates that are entering the lake are from these products,” Staniek says. “And the water company can’t extract the phosphorus from these, so they're going into the lake itself.”

But as far as paddle boarding and swimming goes, his advice is simply to watch out for the blue-green algal blooms.

As for Staniek? He no longer swims in the lake.