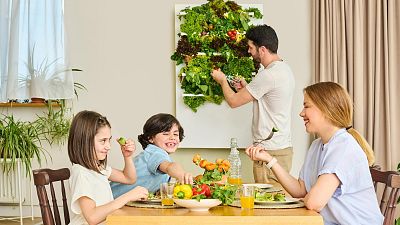 The HydroArtPod uses the same amount of energy as a medium sizes aquarium   -   Copyright  HydroArtPod
By Hannah Brown  •  Updated: 09/09/2022

Aline Pate lives in the UAE with her husband Richard and their two young sons. On moving there, she found all the vegetables in the supermarket were imported and wrapped in plastic.

Not only was she conscious of the environmental impact of this, but also wondered what nutrients were really left in vegetables that had travelled so far.

To combat these problems, she tried growing her own vegetables outside but it didn’t work in the climate. Having experimented with various indoor growing kits that were already on the market, she eventually decided to build something herself.

What she created was the HydroArtPod - a smart indoor gardening system that looks like a piece of art on your wall. Though it was originally just a project for herself, her friends began asking if she could make one for them too.

At first, she said no. She had built her first one by hand and, between work and family life, she didn’t have time to make any more. However, her invention proved so popular that she decided to take it to market.

How to grow vegetables in your own home

“If you can hang a picture, you have space to grow a garden,” says Aline.

The HydroArtPod is a 120x78cm frame which can be stood up or hung on a wall. It’s a hydroponic system, meaning there’s no soil involved - just water and plant food.

Though many hydroponic systems just grow leafy greens, Aline wanted hers to do more.

“My kids eat more than just basil - [if we only had] leafy greens and lettuce, they would look at me and say ‘no mummy that's not for me’,” she explains.

If she couldn’t grow things her children were interested in eating, she would still have to rely on the supermarket and the problem wouldn't be solved.

She incorporated energy-efficient LED lights and support bars to enable the system to grow fruiting vegetables like tomatoes, cucumbers, peas and peppers.

After testing varieties in the system for optimum growth, she also created specialised seed pods made from recycled rockwool.

Plants grow faster using this technique, meaning you could grow a whole lettuce in around 27 days. And with 30 slots to fill in the unit, you could eat a fresh lettuce every single day, if you wanted.

Aline opts to grow all sorts of vegetables and says she sometimes finds her sons snacking on peas straight from the wall.

How to keep your indoor allotment alive

“A lot of us just don't have a lot of time or knowledge [about gardening],” says Aline.

If you’ve ever met someone with an allotment, you’ll know they spend hours and hours tending their patch. But not everyone has spare time, and that’s often where people fall foul in their veg growing plans.

It’s so easy to forget to water your plants.

To help fix this, Aline has developed an app which tracks the HydroArtPod and sends a notification when the water needs refilling, plant food needs adding or your veg is ready to harvest.

“Believe it or not, a lot of people would keep them growing for three months and just not harvest or eat anything just because they don't know when’s the right time.”

The app also helps to track the vitamins and nutrients you’re getting from your homegrown vegetables and suggests recipes to cook with them.

With the rising cost of living, one of the big questions surrounding the HydroArtPod is how much does it cost to run it?

According to Aline, it’s similar to a small to medium-sized aquarium. The lighting is the most energy efficient on the market and the water isn’t constantly being circulated, which helps keep the costs down.

Although the initial unit price isn't the cheapest - you're looking at over €1,000 when it's not on offer - Aline estimates it'll pay for itself in less than a year.

Watch the video above to learn more about the HydroArtPod.