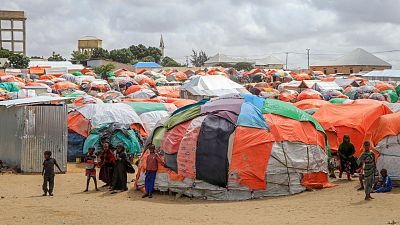 Somali children who fled drought-stricken areas stand by their makeshift shelters at a camp for the displaced on the outskirts of Mogadishu, Somalia Saturday, Sept. 3, 2022.   -   Copyright  AP Photo
By Charlotte Elton  •  Updated: 16/09/2022

Millions of people in 'neglected' regions could soon face violent conflict over water, according to an early warning tool developed by the Water Peace and Security partnership.

News cameras turned to Europe this summer as the continent sweltered through a record-breaking heatwave.

But we can’t neglect other drought stricken regions, researchers have urged.

According to the Water Peace and Security partnership (WPS) - a group of organisations dedicated to tracking resource scarcity - several countries are at high risk of conflict over resources in the next 12 months.

“Water related risks at the moment do not receive the attention they should,” she says.

“Maybe they do so for a short moment, (for example) the floods in Pakistan. But in light of the various crises the world is facing, water typically doesn't make it high on the agenda.”

How do you predict conflict caused by drought?

WPS researchers have developed an ‘early warning tool’ to predict whether water scarcity will lead to conflict.

“It's able to do much more than the human brain could ever do,” Professor Schmeier explains.

Drought can cause food insecurity and displace millions of people.

Those who would otherwise live peacefully are driven to fight over the remaining resources. Governmental systems can also break down, leaving power vacuums.

The tool estimates the likelihood of violence in vulnerable areas. Since it was launched in 2019, it has captured 86 per cent of future conflicts, successfully forecasting more than 9 in 10 “ongoing conflicts” and 6 in 10 “emerging conflicts.”

Which regions could see drought-related conflict over the next 12 months?

Drought in Europe and California has received a lot of media coverage but other areas tend to be neglected. In particular, areas that the world is more accustomed to seeing suffer from drought.

“These are arid and semi-arid regions that have struggled with water shortages for a long time, but climate change is, of course, making things worse,” Schmeier says.

“Coupled with many other factors that can lead to conflict between different water user groups, different provinces, or in some cases entire countries.”

Kenya, Ethiopia, and Somalia have been hit hard by a fourth consecutive season of drought. The war in Ukraine has also squeezed the region’s grain imports, leaving at least 18.6 million people in the area facing malnutrition.

The likelihood of continuing and emerging conflict in the region is high, the WPS report warns.

Prolonged drought is pushing the Nelson Mandela Bay in South Africa area towards ‘Day Zero’ - an ominous term used to describe the point at which city residents have their water taps shut off.

The wider Eastern Cape region suffered a severe multi-year drought between 2015 and 2020. After a brief reprieve, it slipped back into drought in late 2021. Some city residents are already waiting in line for water with jerry cans.

The likelihood of continuing and emerging conflict in the region is high, according to the WPS report.

Levels in the Tigris and Euphrates rivers - lifelines for millions of Iraqis - are running dangerously low.

In late May, river levels were down 60 per cent compared to last year. Surface water shortages have forced the Ministry of Agriculture to cut cropping in irrigated areas in half. Iraq has begged Turkey and Iran to release more water from upstream, to no avail.

“Little or no help is forthcoming from upstream countries, while provinces defy national government efforts to manage the problem internally,” the WPS warns.

The risk of conflict rises as local authorities try to deal with the situations themselves, defying federal edicts on water management. In July, some groundwater workers were attacked in Al Muthanna Province - a possible sign of more violence on the horizon.

Iran and Afghanistan share the Helmud region river, which is running low. Tensions have increased as the two countries compete to secure the limited water supplies.

In Afghanistan, over 90 per cent of the population currently do not have enough food to eat.

Though Pakistan (and areas of India) have faced terrifying flooding in recent weeks, they also dealt with an ‘unprecedented’ heat wave earlier this year.

The likelihood of continuing and emerging conflict in the region is high, according to the WPS report.

What can be done about the risk of water-related conflict?

The tool’s predictions make for grim reading. But hope is not lost, says Professor Schmeier. By identifying the risk of conflict early, researchers can help draw attention to at-risk regions.

“I'm trying to be optimistic. Because I think that the situation just forces us to collaborate,” she says.

Schmeier explains that it forces us to come up with ways to prevent conflict, invent new technology and reduce water loss.

“I think many next steps are needed. It starts with awareness from the individual person all the way up to governments in the international community.”

Individuals can take steps to reduce their water consumption and waste output, while scientists can help increase agricultural efficiency with new irrigation technologies and adaptable crops. Reducing environmental deterioration is also key, because degraded land can turn into a type of desert, with low-quality soils.

“On the more political side, we must develop conflict prevention and conflict resolution techniques,” she said.