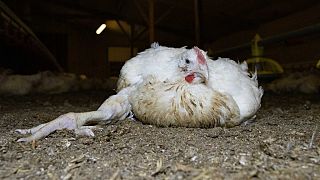 Activists have slammed supermarket chain Morrisons for selling genetically engineered chicken that they say has been through “extreme torture.”

As part of a nationwide campaign, animal welfare charity ‘Open Cages’ descended on 21 Morrisons stores and the firm's headquarters in Bradford over the May bank holiday weekend. They were protesting the chain’s sale of ‘frankenchickens’, birds genetically engineered to grow 400 per cent faster than normal in order to maximise profit.

“Sick, overgrown birds, collapsing in their own waste in crowded factory farms,” Open Cages wrote in a Facebook post.

Last year, undercover filming by the campaign group found chicken being farmed in horrifying conditions on four farms supplying Morrisons. Open Cages has since launched a campaign to stop the sale of these genetically engineered birds.

Morrisons says it cares "deeply about animal welfare" and that all its regular chicken is raised to above Red Tractor standards. Open Cages claims the supermarket continues the practice.

What is the chance that your supermarket sells ‘frankenchicken’?

According to the NGO The Humane League, an estimated 90 per cent of chickens reared for meat in the UK grow to unnaturally large sizes - causing extreme suffering in the process.

These chickens are growing 400 per cent faster than they did in the 1950s - all because farmers have been allowed to selectively breed the animals in order to maximise profit.

“It causes them to collapse under their own body weight, painful leg conditions, redraw burns on their skin from sitting in their own excrement, muscle disease.

“It couldn’t be further away from the image that the public generally has in their mind of healthy, spry chickens.”

As well as being evidently cruel, this widespread practice is also against the law, according to the legal team at The Humane League. That’s why the charity is calling for a judicial review, urging the UK’s Department for Environment, Food and Rural Affairs (Defra) to take action.

How are farmers able to breed chickens to such enormous sizes?

British law states that animals can only be kept for farming purposes if their genetics don’t cause a detrimental effect on their health or welfare.

But the majority of chickens reared for meat, approximately 900 million birds, are growing meat so fast their bodies can’t keep up. This is leaving many of the animals unable to walk, move, or live comfortably.

Just looking at video footage of these birds, struggling to keep their heads up and covered in injuries, it seems very clear that there is a detrimental effect on their health and welfare. Yet the practice is now rife - and seemingly not a problem to lawmakers.

“Most people really aren’t scrutinising,” explains Edie Bowles, a solicitor working for the Better Chicken Commitment alongside The Humane League, “they’re not looking at what laws are being adequately implemented and what laws aren’t.”

I ask Bowles where the responsibility in this matter lies; which body or institution is meant to be scrutinising farming practices?

“There’s a real problem across the board in this country,” she says, “quite often laws that exist to protect animals are often outsourced to a charity, like the RSPCA, to enforce them.”

“That obviously doesn’t happen with human-related crimes. We definitely do have a ‘passing the buck’ attitude towards animal crimes in this country, which has resulted in poor enforcement of animal protection laws.”

Hussain supports this view, explaining how even people who aren’t concerned about animal welfare should be concerned about the government’s lack of action on this issue.

We definitely do have a ‘passing the buck’ attitude towards animal crimes in this country, which has resulted in poor enforcement of animal protection laws.

“Imagine any other government authority just saying, ‘No! I’m going to allow this regardless of the fact the law is clearly in writing.’ I think it is a very concerning abdication of responsibility here.”

The legal case is being put forward on the basis of three main arguments.

Firstly, the practice breaks the law that states animals reared for farming cannot be selected on the basis of their genes, if there’s a detriment to their health or welfare.

Secondly, the team is arguing that there is not a “sufficient monitoring system in place to detect the breaches of law.”

And finally, there is the argument that by failing to have proper monitoring systems, there is an unfair competitive advantage for those producing fast-growing breeds. Any farmer who is compliant with the law, is automatically financially disadvantaged - as the ‘Frankenchickens’ are simply more profitable.

Though Bowles and Hussain are currently focused on British legislation, this isn’t a UK-only problem.

Across the EU there are similar issues, with fast-growing chickens used across member states. According to Compassion in World Farming, these birds are bred to reach slaughter weight in less than six weeks - less than half the time it would take naturally.

What can consumers do to avoid buying Frankenchickens?

While avoiding buying meat altogether is the easiest way to stop supporting the cruelty of fast-growing breeds, not everyone is going to give up meat entirely.

So there are still options for people who want to eat chicken, but do so while causing the least amount of harm.

“There’s a set of standards called the Better Chicken Commitment which ensures better welfare for chickens and ensures the use of slow-growing breeds,” explains Hussain.

“Hundreds of companies have already signed up to this, even KFC and Nando’s.”

Major supermarkets like Waitrose and Marks & Spencer have also joined the pledge.

“But lots of supermarkets and other companies are dragging their feet and essentially profiting off this cruelty,” Hussain adds.

He highlights the UK supermarket chain Morrison’s as a key example.

“We’ve had a long-running campaign over the last year against Morrison’s, trying to push for them to move. It speaks to the point about transparency, as Morrison’s in particular is a kind of brand that focuses on the welfare and health of their products.

“But investigations have shown the extraordinary suffering of the Frankenchickens supplied to Morrison’s,” says Hussain.

In the middle of the worst cost-of-living crisis the UK has seen in recent decades, critics may argue that consumers have no choice but to buy cheaper meat, even if it means supporting Frankenchickens.

“Our view is that it’s important to remember that we are talking about extreme animal cruelty in the context of supermarkets who make enormous profits - and have made huge profits due to the pandemic as well,” he says.

“We have to ask ourselves as a society, if we are willing for these companies to say: ‘Okay well if you want affordable food, it has to be created by nightmarish animal cruelty so that we can maintain our profits.’

“We think it’s unacceptable for that to be passed on to consumers.”

Instead, Hussain suggests consumers should be writing to their MPs and government officials, demanding that these companies take suitable action and stop making money off the back of blatant cruelty.