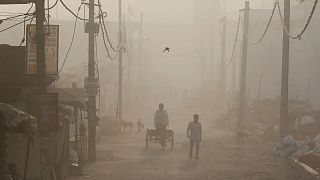 More than one billion people are facing a relentless heatwave in India and Pakistan this week.

Temperatures are forecast to reach 120 degrees Fahrenheit along the border of the two countries in the coming days, meteorologists warn, under a record-breaking ‘heat dome’ for April.

Late spring typically brings the hottest days of the year to India, before the cooling monsoon rains arrive in June. But it has been much hotter than average since early March as a result of climate change, imperilling millions of people and scorching crops the world is relying on.

"Well-off people will have air conditioners in their homes and offices, but here [in New Delhi], people like gardeners and those who work in the open areas, how will they survive in such heat?" gardener Prem Kishore asked AP earlier this month.

India’s increasingly intense heatwaves are a death sentence for hundreds of the country’s poorest people every year.

India’s increasingly intense heatwaves are a death sentence for hundreds of the country’s poorest people every year. Rickshaw drivers, street vendors, daily wage workers and the homeless are at greatest risk of heat exhaustion and heatstroke. At least 2,081 people died during a heatwave in 2015, the country’s worst since 1992.

A heat dome is created when an area of high pressure stays over the same area for days or even weeks, trapping warm air underneath like a lid on a pot. The one that has formed over the Indian subcontinent is sending temperatures over 40C.

On Tuesday (26 April) the mercury hit 47C (116F) in the Pakistan city of Dadu - the joint highest temperature in the Northern Hemisphere this year (tied with Senegal). On the banks of the Ganges, it reached 41C in Varanasi, Uttar Pradesh.

Meteorologists, including Scott Duncan, say the worst is yet to come - with some cities expected to approach 50C. “This heatwave is going to have an impact on more than 10 per cent of the entire population of the planet,” he says.

As well as the deadly toll this extreme weather is taking on India and Pakistan’s people, there are concerns about the impact on national and global food supplies.

Farmers in India’s biggest wheat-producing states of Haryana, Punjab and Uttar Pradesh have watched their fields shrivel under the scorching sun, following an unusually dry March.

“The heat spell occurred very fast and also matured the crop at a faster pace, which shriveled the grain size. This also resulted in a drop in yield,” JDS Gill, the agriculture information officer in the state of Punjab, told India Today.

It comes at a time when the world’s staple food supplies are already under strain due to Russia’s invasion of Ukraine - often called ‘the breadbasket of Europe’ - and other climate change fuelled events.

In light of the war, Indian Prime Minister Modi told US President Biden that India was “ready to supply food stock to the world”. But the unprecedented heatwave has thrown that into doubt.

“[Wheat] prices will be driven up, if you look at what is happening in Ukraine, with many countries relying on wheat from India to compensate, the impact will be felt well beyond India,” Harjeet Singh, an adviser with Climate Action Network International, told NBC News.

In the midst of the crisis, some Indians are going out of their way to protect the country’s wildlife.

“It’s our responsibility to appear as helpers to the speechless animals, birds, and those animals roaming on the streets in such searing heat," said Delhi shopkeeper, Rahul Singh Chauhan, as he distributed water and food to birds.