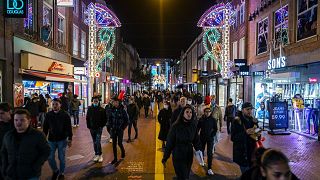 “In this weather, it’s almost as windy inside my house.”

These are the words of Miranda Delhaes, one of the many Europeans experiencing the impacts of energy poverty this year.

We meet in the town of Eindhoven, the Netherlands, just as storm Eunice intensifies, to discuss an issue that touches more than 50 million people across the EU.

Miranda is part of an ‘energy poor household’ – she’s got poor insulation and struggles to keep her house warm.

Other signs of energy poverty include leaky roofing or difficulty paying one’s utility bills. The indicators vary from country to country, even household to household, and can occur individually or several at once. This diversity makes energy poverty a term that is both difficult to define and tackle.

Miranda is part of an ‘energy poor household’ – she’s got poor insulation and struggles to keep her house warm.

With the world’s first International Energy Poverty Action Week taking place this week, from 21 to 25 of February, researchers, policymakers, and industry insiders from Europe, Asia, Africa, and Latin America are meeting to discuss solutions.

The event marks a shift in public awareness that the EU is spearheading as a result of the European Green Deal. The ongoing gas crisis has sensitised national governments to the issue’s urgency and pushed them to adopt policy solutions to help vulnerable households across Europe pay their energy bills.

However, heating subsidies like Denmark’s heating package or the Dutch tax discount on energy bills, are only short-term remedies to a problem that requires a long-term plan.

"If you really want to tackle energy poverty in a structural and most efficient way, you should improve the quality of the housing stock," says Dr Peter Mulder, the author of the most influential-to-date Dutch study on energy poverty by research organisation TNO.

A gap that is widening

While Southern and Eastern EU member-states have a larger share of the energy-poor populace, even in relatively well-off Nordic and Western states, like Denmark and the Netherlands, citizens struggle.

Until recently, both countries deemed energy poverty a small issue that should be addressed only through social policy. This approach is visible in their most recent National Energy and Climate Plans (NECPs), where both countries include no specific national objectives to limit the issues.

Yet, data from Eurostat shows that the gap between Danish and Dutch low- and higher-income households experiencing different aspects of energy poverty is widening.

There are two main indicators: arrears on utility bills and an inability to keep one’s home warm.

EPOV uses two main indicators: arrears on utility bills and an inability to keep one’s home warm. Disaggregated by income level, the two indicators show a different picture than what is painted in Danish and Dutch NECPs.

The country-level differences reflect varied policy approaches. For example, the Netherlands did not experience a rise in arrears on utility bills similar to Denmark’s - due to early-detection measures, such as the Municipal Debt Assistance Act.

Miranda struggles to keep her home warm, because the apartment is insufficiently isolated.

“My house is almost a hundred years old. We were lucky this year with the soft winter, but my son and I put extra socks and layers of sweaters inside the house. It is always windy on the floor so I wear shoes inside,” she says.

Inefficient and leaky dwellings is another indicator that EPOV links to energy poverty, which again affects low-income households disproportionately.

My son and I put extra socks and layers of sweaters inside the house.

EPOV is not the only institution linking energy poverty with inadequate housing. Experts point to leaky dwellings as the root cause of energy poverty too.

“Energy poverty is about low-income people who have high energy costs or live in inefficient houses,” says Dr Mulder from the Dutch research organisation TNO.

As 75 per cent of EU building stock is inefficient like Miranda’s home, she and other citizens have to increase their energy consumption to keep warm, driving greenhouse gas emissions and their household bills up.

With energy poverty rooted in inefficient housing, some experts say the issue should be treated exclusively within social policies.

But the European Commission’s assessment of the Dutch NECP determined its approach to energy poverty as incomplete and called on the country to address the issue with measurable targets. It also argued that Denmark could strengthen its support for vulnerable people, with a target of reducing energy poverty.

Energy poverty lies at the intersection of climate and social issues.

The intersection means that treating the issue with only social policies, such as monetary support or debt assistance, will likely not yield the desired improvements if the quality of the housing stock is not simultaneously improved.

As energy poverty is a hyper-context-dependent issue, experts point at strengthening local capacities as more effective than a one-size-fits-all solution.

“Local authorities often have the mandate and best opportunities to support those in need,” states a spokesperson from the Energy Poverty Advisory Hub.

Lack of a uniform definition does not constitute a barrier to effective action, different experts say. Dr Mulder and Eoin Kelly agree that different national contexts can even make a pan-European definition obstructive to mitigation efforts.

“It is really important that cities and regions implement the right policies and that they play an active role in the transition from a local level,” Kelly says.

While the challenges ahead are significant, so are the potential gains.

Martha Myers from the Right to Energy Coalition and participant at this week’s Energy Poverty Action week is hopeful.

“Although a tragedy, energy poverty gives us the opportunity to reimagine what we need to not only fight the climate crisis but to actually create a better world for people and planet,” she says.